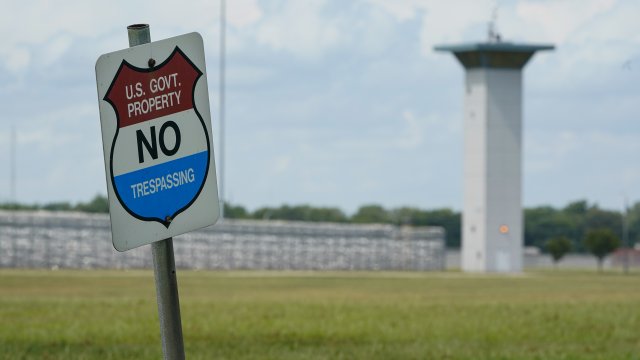 FEAS: "Day by day we are living in this fear. I cannot stop thinking about this. It's like, I cannot imagine going back to prison."

Alina Feas is one of nearly 4,000 convicted felons who may be headed back to federal prison after spending the past year in home confinement.

According to the New York Times, the Biden administration's legal team says it will be following through on a memo issued by the Trump Justice Department calling for thousands of prisoners serving in home confinement to be sent back behind bars.

FEAS: "For the past two months, I can't even sleep. It's crazy. It’s crazy because it’s the not knowing that is killing us. And it's not just me, it's my entire family."

Feas, a former Miami health care clinic director, was serving 11 years for Medicare and Medicaid fraud. Last March, the CARES Act paved the way for federal prisons to place more inmates like her on home confinement for longer periods of time to prevent the spread of COVID among that population.

COVID hit prisons and jails especially hard due to often unsanitary conditions, overcrowding and large populations of prisoners with preexisting conditions. In January of 2021, one in five U.S. Prisoners has had COVID.

And while the early release program allowed thousands of prisoners to transition to home confinement, the Trump administration also penned a memo in its final days declaring that those same prisoners must return after the "covered emergency period" is over.

FEAS: "Just by being able to be with my family, it was like, oh my god, this is the miracle. And I'm telling you, we were so happy until this memo came out in January."

This week, 20 different advocacy groups on both sides of the political aisle released a letter calling for the Biden administration to "prevent this impending crisis" and "commute the sentences of people living in home confinement."

Back in April, several lawmakers issued a similar letter to the administration saying sending these federal prisoners back to prison would be "cruel and devastating."

FEAS: "We are not a danger to society. We have been living outside those walls — in my case, it’s been 14 months. I have never had any problem. I have never had any incident report — I didn't have any in prison for seven years. And I think I, like anybody else, I deserve a second chance."

The timetable for the prisoners' return isn't certain. Due to the Delta variant, the emergency period has been extended and many expect it to last at least through the end of year.