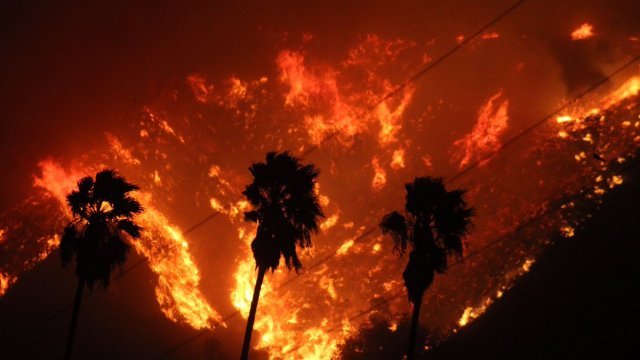 A fast-moving brush fire in Southern California is still burning out of control and at an extremely fast rate.

As of early Wednesday morning, the Thomas Fire had scorched an estimated 50,000 acres in Ventura County. Powerful Santa Ana winds are fueling the flames. CNN reports the blaze burned almost an acre per second on Tuesday.

The Ventura County Fire Department says more than 1,000 firefighters are battling the blaze, but none of the fire had been contained as of 2 a.m. Pacific time Wednesday.

Fire officials say at least 150 structures have been destroyed and at least 27,000 people have evacuated the area.

Because of the fire, Gov. Jerry Brown declared a state of emergency in Ventura County.

The Thomas Fire is one of multiple wildfires burning in Southern California.

By Tuesday evening, the Rye Fire in Los Angeles County had grown to an estimated 5,000 acres. In the same county, the Creek Fire had burned more than 11,000 acres by that same time.