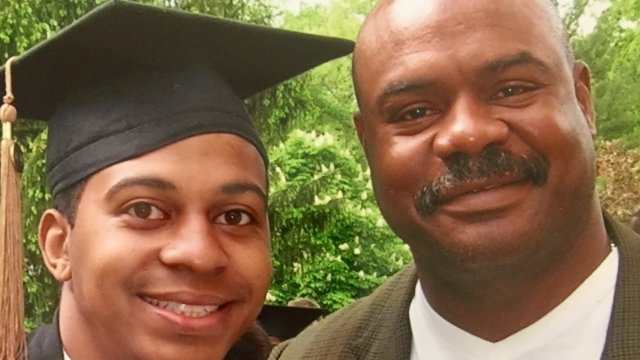 SMS
An NFL Son Who Lost His Dad To CTE Works To Ban Youth Tackle Football
By Jamal Andress
By Jamal Andress
February 2, 2018
Former NFL great Dave Duerson shot himself in the chest in 2011 — seven years later, his son wants to stop kids under 12 from playing tackle football.
SHOW TRANSCRIPT

Football is the most popular sport in America — by a lot. More than a million high school teens played in 2017, nonprofit youth program Pop Warner has more than 300 thousand kids on the field every fall, and on average, 111 million people watch the Super Bowl every year.

Despite those numbers, the most clear and present danger to the sport and its future is Chronic Traumatic Encephalopathy otherwise known as C.T.E.

Tregg Duerson lost his father Dave Duerson in February of 2011. Tregg's father was a four-time Pro-Bowler, a two-time Super Bowl champ and one of many former NFL players who suffered from CTE.

"In the case of my father toward the end of his life, … I can definitely see moments when he was forgetful, moments when he just couldn't control his own temperament and anger. But CTE is not just an NFL problem; it's also a youth problem," Tregg Duerson said.

"He talked about issues with memory loss, spelling, trouble remembering how to drive home and directions. So he was very frustrated with the diminishing mental capacity he was experiencing," Duerson said.

Duerson shot himself in the chest at age 50, and in his suicide note, he requested his brain be donated to Boston University's brain bank to be studied.

"It was really a moment of clarity that it gave us. … You can't separate the experiences with CTE and without CTE. CTE was a part of him, but we still obviously loved him very deeply," Duerson said.

Now, Tregg Duerson has attached his last name and, by extension, his father's legacy to new legislation — the Duerson Act — that would ban tackle football in Illinois for kids under 12.

"Since my father died in 2011, we've been very passionate about protecting youth sports and youth football, and we've been at the forefront of this issue. … So attaching our name to it was a no-brainer," Duerson said.

Several studies over the past few years have linked participation in youth football before age 12 to an increased risk in behavioral and cognitive problems later in life. As a result, youth football participation has declined in recent years — not by much, but the idea of kids getting brain damage on the gridiron has taken its toll.

Despite that, neurosurgeon Dr. Julian Bailes doesn't think the ban on tackle football is necessary or helpful — and he would know. Bailes is one of the country's leading minds on concussion research. He helped expose CTE in the first place. He's won awards, treated hundreds of patients, and before Alec Baldwin was playing the president he did his best Bailes impression in the movie "Concussion."

"The real issue with tackle football is not when you're a little kid weighing 60 or 80 pounds and running very slowly. … There is no scientific proof or consensus that the age of 12 is the cut off that if you play before 12 you get an injury, if you play after 12 you don't. There's never been a case of CTE documented in someone who only played youth sports," Bailes said, who is the director of NeurosurgeryNorthShore University HealthSystem.

Since the NFL acknowledged the existence of CTE, football leagues have taken steps to make the game safer.

That said, it's important to mention, Bailes chairs the medical advisory committee for Pop Warner —  Pop Warner being the largest youth football program in the country.

"At every level, we've tried to eliminate the particularly bad or egregious head-to-head hits. … We think there are 100 or less hits a year in Pop Warner football," Bailes said.

Both Bailes and Tregg Duerson love the game and recognize the value that comes with it. But they're also conflicted about what it's done and what it can do to players.

"It was not always a fun journey to look to the discovery of brain damage in the sport that I played and still love. I think it's uniquely American and a very important sport for kids and young adults to play," Bailes added.

"Oh, absolutely. I'm definitely conflicted with the sport. It's been a heartbreaking love affair. ... Me and my family have gotten so much from the game. … But it also took a lot from me. It contributed to my father's demise. … That all is in a storm where football is at the center of it," Duerson said.