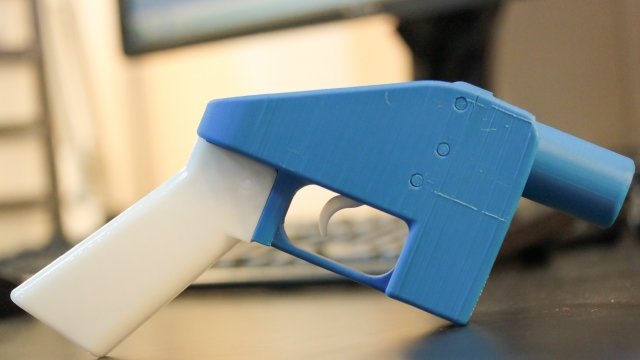 SMS
This Man Made It Possible (And Maybe Legal) To 3D Print Guns
By Cat Sandoval
By Cat Sandoval
July 19, 2018
The gun control debate has become a little more complicated with 3D printable gun blueprints in the mix.
SHOW TRANSCRIPT

The distribution of the DIY 3D gun blueprints online has been temporarily blocked by a federal judge.  At the center is Cody Wilson, founder of Defense Distributed, who won his settlement against the State Department to upload his 3D gun instructions online.

"There are a few types of guns that can be made on 3D printers now, although none of them are reliable or have any type of substantial commercial quality that you might expect in a real gun," says Wilson, "It doesn't take a ton of knowledge or expertise. It might take a lot of patience."

Five years ago, the State Department shut down Wilson's website because it violated international export laws. Wilson said the code was protected under the First Amendment right to free speech and sued. In June, the State Department settled with Wilson — allowing him to share gun instructions online. Wilson's website Defcad was supposed to be published August first with new gun blueprints available for free — until a federal judge temporarily blocked its release. 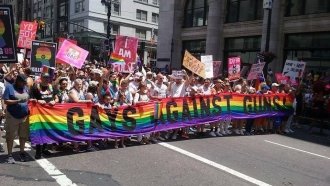 Rainbow Flag Takes On Additional Meaning For Gays Against Guns

But how exactly do you get from here to an actual working gun? It's about downloading the blueprints, which are on a CAD or a design program, and then printing every individual part on a 3D printer. You can use plastics or metal. Then you put all the parts together. According to Wilson, an average 3D printer can take as little as 24 hours to build a pistol.

Under the current law, you don't have to license or register a 3D printed firearm if it's intended for personal use and not for sale. That’s why some people call 3D printed firearms “ghost guns” — they’re unregistered, and therefore untrackable.

Critics like Adam Skaggs, chief counsel at the Giffords Law Center to Prevent Gun Violence, tells the Washington Post: “It’s going to make it much easier for dangerous people, otherwise prohibited from getting guns, to get them.” 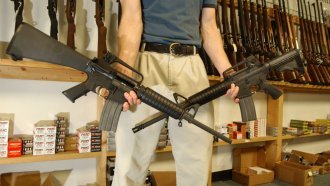 AR-15 style rifles were used in the mass shootings at Parkland high school, Las Vegas, Newtown and the Pulse nightclub. That blueprint for the AR-15 was going to be available on Wilson's website.

"I understand the argument that at some point, someone who's not allowed to own a gun might make one for himself, because of access to this information. But that was always already true before my case. My case didn't didn't somehow change that. And now to some degree at the margins,  I might make that easier," Wilson said. "But the problem is that you have to draw lines about policing information and access to knowledge itself."

Right now, buying guns is often cheaper than printing them – 3D printers range from a few hundred to several thousand dollars. But as 3D printers become more accessible and less expensive over time, accessing “ghost guns” may get easier.