This Is How Canada Has Managed To Resettle More Than 27,000 Syrians 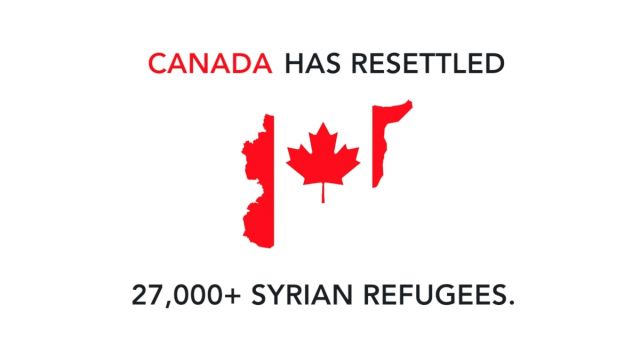 SMS
This Is How Canada Has Managed To Resettle More Than 27,000 Syrians
By Jake Godin
By Jake Godin
June 9, 2016
Canada has had a private sponsorship program in place since the late 1970s, something that's helped it quickly resettle thousands of Syrian refugees.
SHOW TRANSCRIPT

Canada has resettled more than 27,000 Syrian refugees in less than a year. That's a lot.

In fact, comparing how many refugees Canada has taken in to the size of its economy, one study showed the country is one of the best at doing its fair share.

It works like this: Canada has two main streams for sponsoring refugees — private and government. Let's start with the government route.

In these kinds of sponsorships, government agencies give refugees a broad range of services to get them settled in Canada.

These kinds of agencies are in 36 communities throughout Canada, and on top of those are hundreds of other organizations helping provide services for refugees.

Government-assisted Syrian refugees make up the bulk of those who've come to Canada — about 15,000. Still, almost 10,000 have come through the other stream: private sponsorships.

Groups ranging from five people to hundreds can get together to privately sponsor a refugee family. They need to raise anywhere from $12,600 to $32,500 Canadian, or about $9,900 to $25,500 U.S., depending on the size of the family. The more members, the more money is needed.

Once the sponsors have the money, they simply wait for the government to match them with a family. Then it's a matter of picking the family up from the airport, moving them into a house, giving them furniture, providing emotional support and answering any questions. Of course, they won't be able to provide everything, so private sponsors will work with agencies to help with technical matters like teaching them English and getting them health or residency cards.

What makes Canada's system even more impressive is comparing it to its neighbor to the south, the United States, which hasn't even come close to resettling its fair share of refugees.