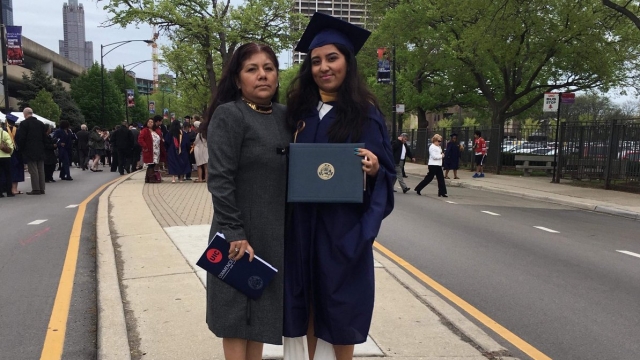 SMS
Why This Dreamer Opposes Trump's Wall-For-DACA Deal
By Ben Schamisso
By Ben Schamisso
January 24, 2019
She's against Trump's deal to extend her own protections because they're temporary and exclude millions of undocumented immigrants, like her parents.
SHOW TRANSCRIPT

"Three years of legislative relief for 700,000 DACA recipients brought here unlawfully by their parents at a young age many years ago," President Donald Trump said on Saturday.

"People need a pathway to citizenship. And we have three million Dreamers in this country, and we should be protecting these people," Democratic Senator Kirsten Gillibrand told ABC News.

But beyond the halls of government, those who would be the most affected by a tentative deal are disillusioned by hearing their fate debated by politicians again and again.

"Not knowing exactly when the next push is going to be, what the next step is going to be... The fact that it's been on constant television and negotiations: it's a sense of something that is not permanent," said Janeth Vasquez.

Janeth Vasquez is one of 700,000 DACA recipients. She qualified for the Obama-era program in 2012 because she was brought to the U.S. by her parents almost 20 years ago. Thanks to DACA, she's been protected from deportation and is able to work and drive legally. But as an immigrant activist, she's long been unsatisfied with DACA’s requirements. That's because the program excludes millions of undocumented immigrants, like her parents, who were either too old or too young when DACA was introduced.

"It's hard to believe in something that is — that was — always temporary and that always was a division of our families. I think that DACA was never the answer in the first place."

"Something that I am aiming for, is obviously, to have, you know, a pathway for, for citizenship, not just for me, but for my parents. My parents have been living here for almost 20 years. And we grew up here, we have studied here. I wouldn't be comfortable, you know, taking a deal that would right now extend three years of DACA protection. I mean, it's not about just DACA recipients, right? It's not about fighting for my own individual rights. It's about fighting for everyone."

President Trump proposed to extend protections by three years for all 700,000 DACA recipients as well as 300,000 immigrants from African and Latin American countries. These are known as temporary protected status, or TPS, holders who came to the U.S. because of natural disasters or armed conflict in their home countries.

"300,000 immigrants whose protected status is facing expiration will now have three more years of certainty," President Trump said on Saturday.

But because President Trump himself ended DACA and TPS status for these immigrants, his critics say his offer is actually one-sided.

House Speaker Nancy Pelosi: "What the president proposed is granting what he had already taken away."

After rescinding DACA in 2017, President Trump said last year that he wanted a "bill of love" for DACA recipients. But he later walked away from a bill that would have provided $25 billion for border security in exchange for giving a pathway to citizenship to some 1.8 million so-called Dreamers. As a result, immigrant advocates are weary of the president's words.

"He rescinded it and tried to block it in all ways that he could and this shows that this negotiation is not really about us," Vasquez said

Still, Republicans say now that the president has come up with an offer, it's up to Democrats to at least join the negotiating table.

"It's a strong proposal, it's the only thing on the table," said Senate Majority Leader Mitch McConnell.

"The responsible thing to do for Democrats is to put a counter-offer on the table," Republican Representative Liz Cheney told NBC News.