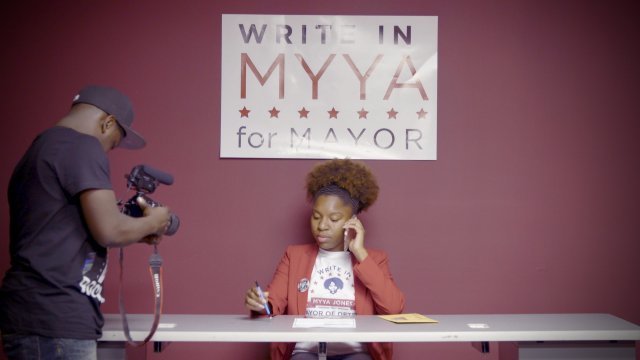 SMS
This Doc Explores 'The Year Of The Woman' From The Ground Up
By Ben Schamisso
By Ben Schamisso
October 17, 2018
"Represent" follows the lives and campaigns of three women who are running for political office for the first time.
SHOW TRANSCRIPT

More women are running for Congress this year than ever before, leading some commentators to already call 2018 "the year of the woman." That label would especially ring true if most of these women win their elections.

But regardless of the outcomes, an all-female team of filmmakers decided to take a thorough and intimate look at the trend from the ground up. Their in-progress documentary "Represent" follows the grassroots campaigns of three first-time female candidates running for state representative in Illinois, mayor of Detroit and township trustee in rural Ohio.

After the 2016 presidential election, director Hillary Bachelder heard rumors about how the number of women signing up for political training nationwide was through the roof.

"These weren't women who are really well-connected," Bachelder explained. "They didn't have easy fundraising access. They didn't come with that sort of built-in network of support. So that's sort of the first-time candidate approach. We really wanted to document the whole learning curve, you know, the good, the bad and the ugly."

The women profiled in the film are running in urban and rural communities. Bachelder hopes that their down-to-earth stories will make the political process less intimidating to viewers.

"Focusing on something local does enable us to see the messy bits and see the behind-the-scenes in a way that I don't feel like we always get from political documentaries at this kind of higher, shinier level," Bachelder said.

But her film, which will be released next fall, is meant to do more than inspire.

Bachelder said: "There are moments that are incredibly inspiring and encouraging. And then there are moments that you just want to bang your head against the wall because the right person in power isn't seeing that this person has potential, or they're not getting the fundraising traction that they should be getting. Maybe all these women run this year but get totally burnt by not getting that level of support, and feeling like they were sort of a one-woman-band throughout the process. And they don't decide to run again. We need to find a way to scoop those women up and say, even if you don't win this time, how can we give you better training and better support so that you can run again next time?"

Only 20 percent of current Congress members are women. And the U.S. ranks 104th in the world for gender parity in politics. Even though the push to elect more women tends to come from the left, Bachelder says the overall representation issue doesn't have to be a partisan one.

"Even if you're someone who is a lifelong Democrat, I don't think you get to say that you support more women in office and then make a footnote that says, 'but just Democratic women,'" Bachelder said. "We did intentionally cast both Democrats and Republicans. I don't want to make films that just reverberate around our liberal bubble. Like, I want to ask people to feel a little uncomfortable and to have to put a little bit more thought into it."

"Represent" is partnering with national organizations that advocate for gender parity in politics. These groups will use the film as an educational tool for women who are considering stepping into the political spotlight.