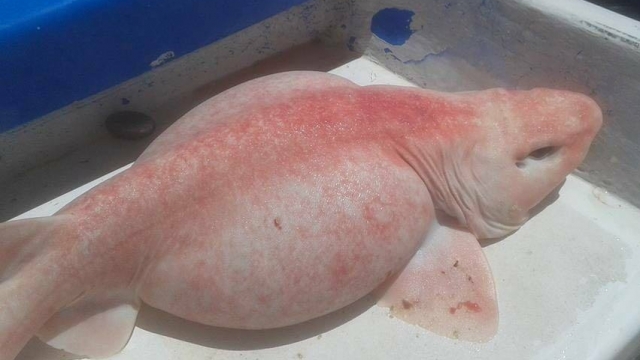 SMS
This 'Alien Fish' Came From The Ocean, Not Outer Space
By Newsy Staff
By Newsy Staff
April 6, 2016
The strange-looking creature was captured off the coast of Los Cabos, Mexico. It took a few days to figure out what it was.
SHOW TRANSCRIPT

This is no fish tale — this "alien fish" is the real thing.

This odd-looking, pink-and-white creature was captured about a mile off the coast of Los Cabos, Mexico, recently, and no one could quite figure out what is was. Fish? Shark? Something from another world?

"What was it? Where did it come from? Who are the all-powerful creatures it brought from outer space? And what do they want on Earth?" a trailer for "It Came From Outer Space" said.

Pisces Sportfishing Fleet posted the images to Facebook, and users took their own guesses.

The fisherman, a high school senior from Chicago on a fishing trip with his dad, told the Chicago Tribune, "I asked our guide what it was, and he said he had never seen anything like it in 25 years of doing this."

But a later update from the same group gave a possible explanation — the "alien fish" is actually an albino swell shark.

In the picture, the captured fish's stomach is completely swollen, which, as its name suggests, is a common practice for this creature to ward off predators.

The rare shark was eventually released into the ocean to continue its long, strange life.

This video includes clips from YouTube / ProfessorRamey and "It Came From Outer Space" / Universal Pictures, and images from Facebook / Pisces Sportfishing Fleet and City.and.Color / CC BY 2.0.