Think Iowa Is All Cornfields And Caucuses? Think Again 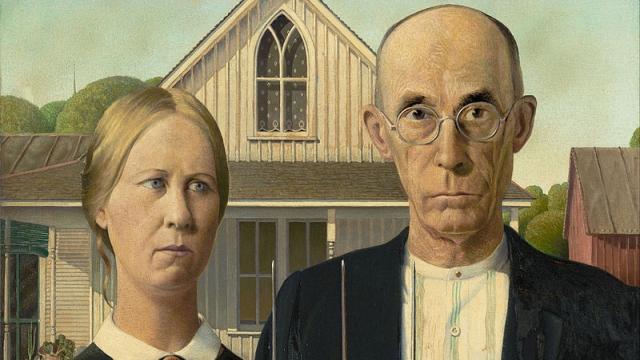 "Rough estimate: how many overalls do you own?" we asked an Iowa resident.

"Rough estimate would be zero," the local responded.

So, it turns out not all Iowans are farmers — just the ones you see interviewed on TV.

"This farmer tells us Cruz won't cut it here," an ABC reporter said. (Video via ABC)

Manufacturing and financial services contribute more to the state's economy than farming.

Maybe there's a bit more to Iowa than its reputation as the state with the most pigs in captivity. (Video via Iowa Public Television)

Because at first glance, Iowa doesn't exactly look like America, and I'm not just talking about the cornfields.

"It doesn't represent the rest of the country. Too white. Too evangelical. Too rural," Andrea Mitchell said. (Video via MSNBC)

That's the knock on Iowa: It's a poor representation of the country, and yet its caucuses get to go first.

Compare Iowa's demographics to the rest of the country's: Non-Hispanic whites make up 87 percent of the state, blacks just over 3 percent and Hispanics 5 percent. Those numbers are significantly lower than the national average.

It may not be racially representative of the country, but consider a few facts.

The oldest mosque in North America is in Cedar Rapids. (Video via Detroit Public Television)

And don't discount the state's growing diversity. Iowa's Hispanic population grew by 100 percent in the past 15 years. The state's Asian and black populations are slow-growing — but still growing.

And when it comes to politics, it's tough to criticize Iowa's "representative-ness." It's current two U.S. senators are Republicans, but the state voted for President Obama in the past two elections. It's competitive for both parties, and that's more than a lot of states on the coasts or in the Deep South can say.

Perhaps there's more to Iowa than some would have you think.

"When our show is in Iowa, I'll have corn-y jokes," said a Fox News anchor.