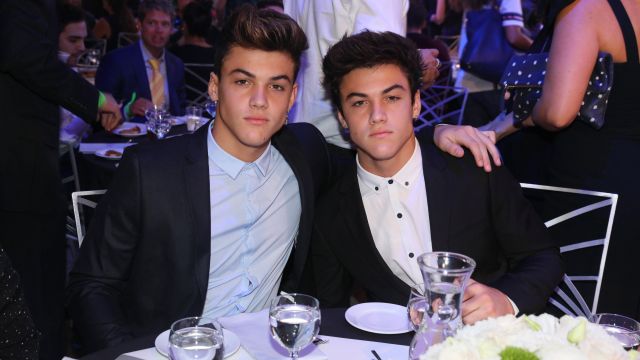 SMS
These Twin Teen YouTube Stars Were Just Too Much For Their Fans
By Katie Link
By Katie Link
June 6, 2016
In total, 28 people were injured at Grayson and Ethan Dolan's show in New Jersey. Seven of those fans had to be hospitalized.
SHOW TRANSCRIPT

Let us explain. Over the weekend, the Dolan twins — who have amassed a following of nearly 2 million YouTube subscribers — played a show at an event center in New Jersey. As the boys took the stage to perform, a crowd of mostly 11- to 15-year-old girls reportedly rushed forward, injuring dozens.

The Asbury Park Press reports police were called to the scene about half an hour after the show started. In total, 28 people were hurt, seven of whom were hospitalized.

Video from inside the concert shows just how excited the crowd was. Yes, that's one of the twins taking off his shirt and offering it up to the crowd.

Needless to say, the story of young girls quite literally fainting in excitement at seeing the twins has the internet in fits. A writer for Vanity Fair compared the reaction to the "Salem teens of old," writing: "The Dolans are truly a volatile element, like uranium or plutonium. Powerful, useful, but potentially dangerous. They must be handled carefully."

After some crowd control, the concert eventually resumed.