These Are The Most Interesting People We Met At The DNC 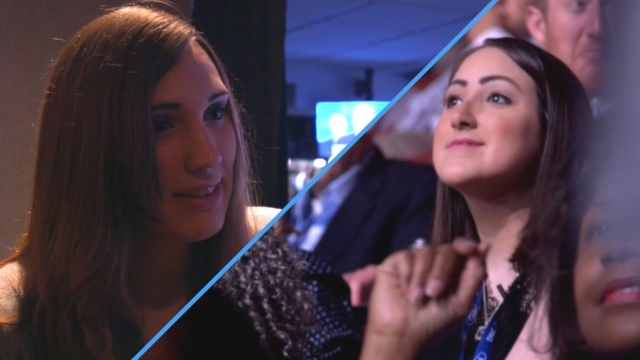 "Hey everyone! Welcome to Day Three of the DNC. Obama is currently speaking right now, and we got shut out," Newsy's Kate Grumke said.

"We didn't get in," Newsy's Eugene Daniels said.

"Yeah, they closed it down for security, so that's why we are here in the media filing center rather than inside the hall tonight," Grumke said.

"It's been a busy day," Daniels said.

"We met some really interesting characters."

"First was Sarah McBride. On Thursday, she'll make history as the first out trans person to speak at a major party convention."

McBride said: "My hope, genuinely, is that when they see this speech, I can provide them a little bit of comfort and a little bit of security that they can live their truth, and they can be respected and affirmed and seen and valued in it."

Daniels said: "We talked to her about, was she nervous about speaking in front of all these people? And she said the Democratic Party has really cultivated a building over there and also just a feeling of a safe place for her to feel really comfortable talking about that.

"And we also did a story on Rachel Gonzalez."

Gonzalez said, "I am 17, and I am Hillary Clinton's youngest delegate for the 2016 presidential election."

Daniels said, "She barely makes the cut at 17, turning 18 in October, like barely before the general election voting starts.

"You can catch both of those stories on the website now. Let us know what you think. We think both of these people are really interesting. Hit us up on Twitter. I'm @EugeneDaniels2."