A Ninth Planet Could Be Tilting Our Solar System 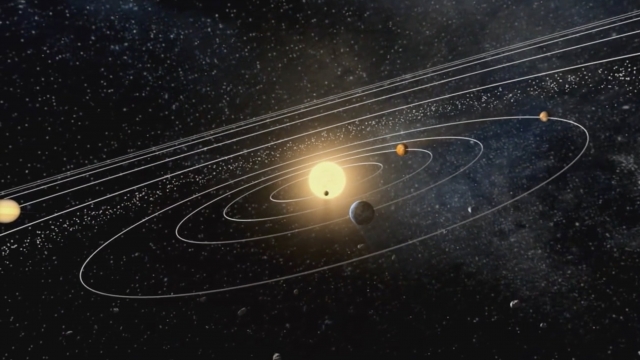 SMS
A Ninth Planet Could Be Tilting Our Solar System
By Ryan Biek
By Ryan Biek
October 20, 2016
Researchers say our solar system might be hiding a distant planet that has a mass 10 times greater than Earth's.
SHOW TRANSCRIPT

Our solar system may have a ninth planet so far away, we haven't seen it yet. But we think we can see how it might have shifted our known planets.

If Planet Nine exists, it's likely located beyond Neptune and has an icy surface.

Researchers at the California Institute of Technology believe its mass is roughly 10 times more than Earth's and think it could be 93 billion miles from the sun.

Despite such a lingering pace, scientists say that very orbit and Planet Nine's size could explain why our solar system is tilted out of alignment.

If you check out the orbits of the eight known planets in our system, you'll notice they all travel around the sun in the same relatively flat zone –– only that zone is about 6 degrees off the sun's equator. That's always confused scientists.

The Caltech researchers believe the answer may be a giant planet — Planet Nine — with an even stranger orbit. If it rotates 30 degrees off the other planets' tilted plane, the math for it affecting the known solar system would be pretty close to perfect.

Basically, the astronomers are saying the eight known planets used to revolve perfectly around the sun's equator. But Planet Nine is so big, its gravitational force is incredibly strong. And like fighting a tide, the other planets slowly drifted out of alignment.

The math may seem uncanny, but researchers say it adds to the growing evidence of Planet Nine's existence. Still, the giant planet is considered hypothetical until researchers can see it with their own eyes. The scientists at Caltech believe that may be just a couple years away.