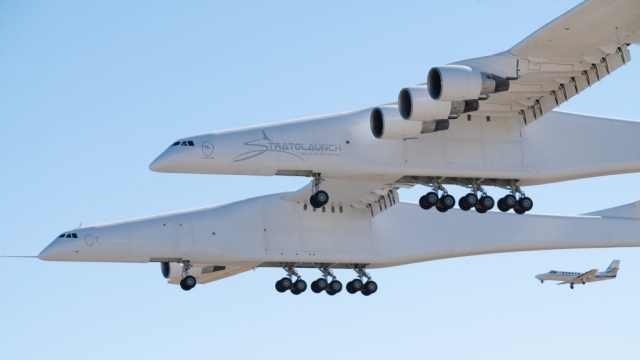 What weighs half a million pounds and has six engines and a wingspan longer than a football field? A brand new Stratolaunch aircraft that now holds the record of world’s largest plane by wingspan.

Developers spent years getting the super jet ready for takeoff. Its first test flight took place in a desert in California on Saturday and saw a pilot take the mammoth of a plane 15,000 feet into the air. Stratolaunch says it was a raving success.

The more than 200-foot-long aircraft is designed to launch satellites into orbit. It'll do this by carrying a rocket loaded with satellites 35,000 feet into the air before shooting the rocket into space.

Stratolaunch says the jet will be a more cost-effective way for private companies, the military and NASA to get into space. Planes require less fuel than traditional rockets, they require cheaper infrastructure and equipment, and they're better equipped to fend off weather delays.

Though Stratolaunch is one of the first mega jets produced for space travel, it probably won't be the last. Richard Branson's Virgin Orbit aims to test launch a refurbished Boeing 737 plane with similar rocket-shooting goals sometime this year.