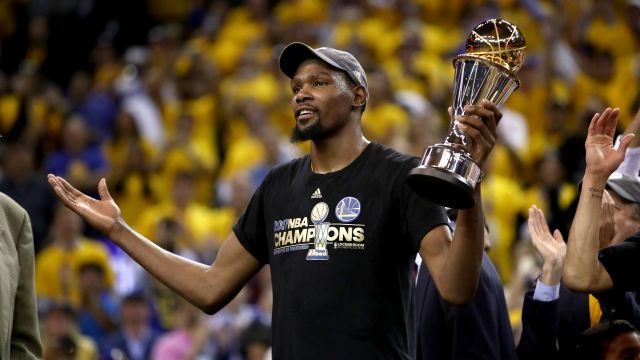 The first-ever NBA Finals trilogy is over, and the Golden State Warriors are NBA Champions again.

Led by NBA Finals MVP and newcomer Kevin Durant, the NBA's latest "super team" proved to be too much for the Cleveland Cavaliers.

Durant averaged 35 points, eight rebounds and five assists per game, but the impressive part is he did it shooting 56 percent from the field.

Not to mention he got a quick jab at his critics with a well-timed Nike commercial shorty after the confetti fell in Oracle Arena.

This championship was revenge for the Golden State Warriors, who blew a 3-1 lead in last year's NBA Finals to the Cleveland Cavaliers. That helped LeBron James bring the first major sports championship to the city in more than 50 years.

Speaking of LeBron James, he also made history this year, becoming the first player ever to average a triple-double in the NBA Finals. He is now 3-5 in his eight NBA Finals appearances.

This is the Warriors' fifth NBA title in franchise history and its second in three years. But with a core of NBA stars under 30, odds are they'll be back.