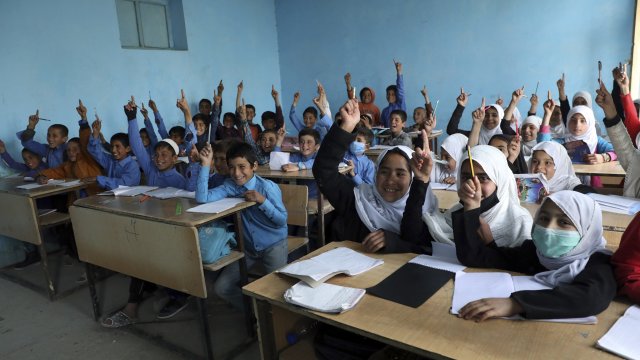 With news that all U.S. and NATO troops will soon leave their country, many Afghans are feeling anxious about their future.

"If the U.S. troops leave, the consequences will be a civil war again. Because the different parties and warlords in our country will claim superiority and will fight for power," said Ahmad, a Kabul resident.

Despite Secretary of State Antony Blinken's surprise stop in Afghanistan on Thursday to assure senior politicians that the U.S. will remain committed to the country from afar, many fear the Taliban could soon return to power.

"If the Taliban come back to Afghanistan with the mentality they had 20 years ago, we will lose all our achievements. Like standing in front of a camera and speaking out. Or simply leaving our homes," said Marjana, an independent journalist in Kabul.

"Many people studied and got educated and made a living for themselves and made small businesses. It would be bad to see them leave their country again and seek asylum in other countries," said Asif Zamani, a Kabul resident.

The Taliban ruled Afghanistan from 1996-2001 and imposed stringent restrictions on the population based on their radical view of Islam.

Hours after President Biden's withdrawal announcement, the extremist group said it would not attend a planned peace conference with the Afghan government, increasing fears of civil unrest.

"The U.S. should have waited until at least a partial agreement happened between the Taliban and the Afghan  government," Marjana said.

President Biden says 300,000 U.S.-trained Afghan soldiers will continue to "fight valiantly" to defend, among other things, the rights of Afghan women.

But independent journalist Marjana says her country's best shot at long-term stability is a peace deal.

"Our hope is that the Taliban should realize that after the withdrawal of the foreign forces, this country is not an invaded country anymore and they should make peace," she said.

That's ultimately what most Afghans want: the ability to live in a free and democratic country without having to rely on the everlasting presence of foreign forces.

"Foreigners will leave one day. We should not expect them to build our country and bring security. We should work hard and make a prosperous country ourselves," another Kabul resident said.