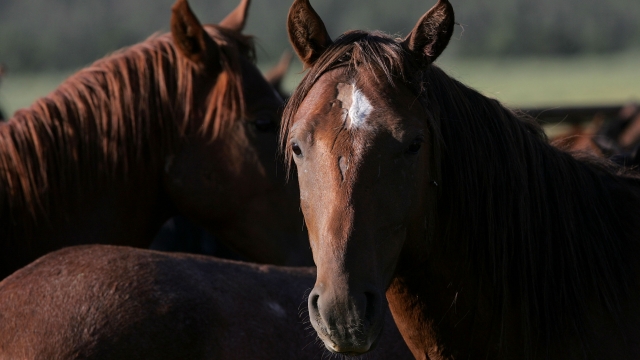 SMS
The US Government Wasn't Really Going To Kill Thousands Of Wild Horses
By Briana Koeneman
By Briana Koeneman
September 16, 2016
A U.S. government advisory board said this week it "does not and will not euthanize healthy animals."
SHOW TRANSCRIPT

Animal rights activists were outraged, but it looks like the animals' lives will be spared after all.

SEE MORE: 2 Horses Die At Pimlico Before The Preakness Stakes

The Bureau of Land Management's National Wild Horse and Burro Advisory Board put out a statement saying it "does not and will not euthanize healthy animals."

And a spokesperson for the bureau told The New York Times, "We're not going to sell to slaughter or put down healthy horses."

See, the bureau has rounded up more than 45,000 wild horses and donkeys in government-funded corrals, pastures or sanctuaries.

It's expensive to keep them there — over $49 million per year.

On top of that, there are about 67,000 wild horses roaming public lands out West, which is about three times more than officials say the land can handle.

The bureau also says it can't keep up with how quickly the population is growing. According to estimates, the number of horses and donkeys on bureau-managed lands shot up by about 15 percent from last year.

Now, the wild horse and burro advisory board's recommendation is simply a suggestion; it can't make any binding decisions.

But the proposal might have done more than just ruffle some feathers.

As a writer for The Washington Post notes, "The recommendation ... has served as a flare, drawing attention to an enormous problem long wrangled over by many passionate parties."

The advisory board is scheduled to meet again around spring to discuss the issue.