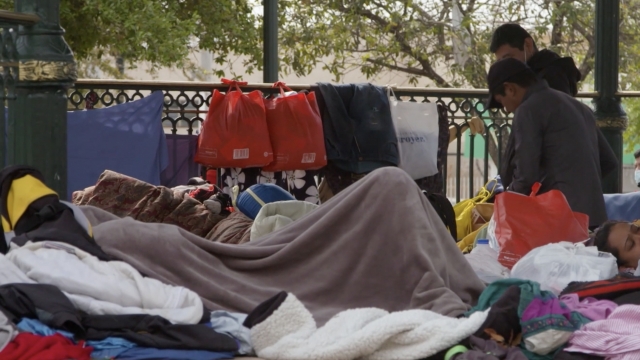 A father from Guatemala stands on the steps of a gazebo in Reynosa, Mexico, terrified to go further.

"If we go on the streets out there, it will be more dangerous for us and our children," he says. He talks about threats from the gangs here.

His is one of dozens of families here, packed tightly on the floor of the structure at the center of a small park. They've been dumped near the foot of a bridge connecting Reynosa to Hidalgo, Texas, expelled after trying to cross the border.

Many families here have young kids, just not young enough.

"There is no clear statement of what the law is," Jennifer Harbury, a lawyer and activist who comes here often, says. "There's way too much discretion."

A senior Customs and Border Protection official says families with so-called "tender-aged" children are being processed into the U.S., but only in cities bordering the Mexican state of Tamaulipas. It's one of the most dangerous places in Mexico, and it has the same state department travel advisory as Iraq and Afghanistan.

"They are being picked off," Harbury says, describing the threat of gangs kidnapping migrants. "It's like dumping a bunch of fresh fish in a shark tank."

Families left here often aren't from Mexico and have no means to get back home. Many times, they're waiting for a space in a nearby shelter or hotel. Sometimes they can find a bus ticket back home. In the meantime, the wait is agonizing.

"To go to the bathroom, you have to pay," one woman says. "And the cold is difficult, too." She's pregnant and traveled alone from Central America but couldn't get into the U.S.

Another woman, traveling with her daughter, says she's terrified and wants to get out but has nowhere to go. She walks barefoot on swollen feet, saying someone stole her shoes.

The threat of kidnappings is most alarming for these migrants.

"I calculate half to 80 percent of the people I've known over the years have been kidnapped here," Harbury says.

Some parents are so desperate to get their kids to safety, they send them from Reynosa to the U.S. alone, knowing the Biden administration won't turn away unaccompanied children.

The president says no migrant family should currently be allowed to stay in the U.S.

But in Tamaulipas, the Mexican authorities won't take young children back.

"We're in negotiations with the president of Mexico," President Biden said. "I think we're going to see that change."

In some cases, CBP is relocating families with young children to a place like El Paso, a city that borders the Mexican state of Chihuahua. There, they can be expelled, leaving the families in an unfamiliar place through which they never passed on their way to the U.S.

If President Biden expanded the number and demographic of families expelled from the U.S., it would build on a Trump-era policy that sent migrants away under Title 42, a piece of law that uses the coronavirus pandemic as a reason to expel migrants.

"We've got a lot of nerve using that as an excuse," Harbury says. "COVID doesn't go by immigration category, right? Like I could pick up COVID today, going over there and working with 100 people, and bring it right on in."

Nonetheless, Title 42 doesn't appear to be going anywhere, at least not soon.

In the meantime, without clear policy on which families can stay and which can't, migrants are still showing up at the doorstep of the United States, desperate for a way in. And many will end up back in places like the park in Reynosa, curled up on the floor of a gazebo.