The Tattoo That Can Tell Your Temperature 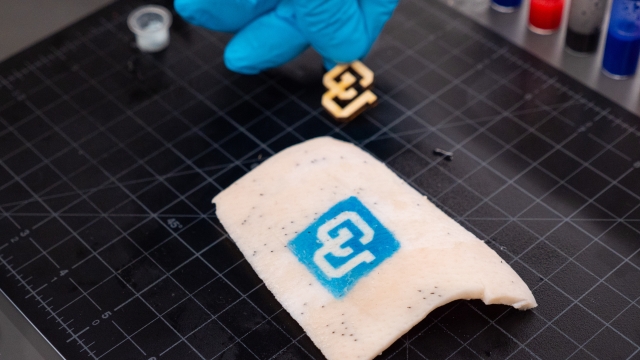 SMS
The Tattoo That Can Tell Your Temperature
By Lindsey Theis
By Lindsey Theis
January 17, 2019
Color changing tattoo inks could be used to monitor blood alcohol levels or detect if you have a fever.
SHOW TRANSCRIPT

What if you could get a tattoo that monitors your temperature, blood sugar levels, or even UV exposure? New technology is aiming to take tattooing beyond personal expression to healthy application.

Carson Bruns runs the Laboratory for Emergent Nanomaterials at the University of Colorado. He’s combined his background in nanotechnology with his passion for art to create new tattoo inks. They work with tattoo guns, but the makeup of the ink itself is different. Normal tattoo ink is made of tiny pigment particles. His invention uses micro capsules which change color under certain conditions.

"There's not an official name yet. I like the name chameleon tattoos. Is very small and freckle shaped so I call it a solar freckle because it's powered by sunshine. These are very small. They're about 1 micrometer in diameter which is between 100 and 1000 times smaller than the width of a single human hair. You can only see them in a microscope. They're too small to see with your naked eye," Bruns told Newsy.

It will likely be years before these solar freckles or chameleon tattoos would be offered at your tattoo parlor. But Bruns thinks they could have several practical applications.

"So the tattoo that we have. That's for the furthest along right now is a U V sensitive tattoo. So it's invisible normally but when it's exposed to enough ultraviolet or UV light it changes color. They kind of act as a real time naked eye indicator of your skin's UVA exposure. It's a sign that you need to put on sunscreen that you're dangerously exposed to UV light you're at risk of higher risk of sunburn and skin cancer," he said.

Bruns also thinks the inks could even be used to monitor blood alcohol levels or detect if you have a fever.

"We think you could make a sort of tattooable thermometer that would allow you to read your body temperature without using a thermometer for example. And we have other ideas too about ways we can make a tattoo to detect things that are happening inside of your body." 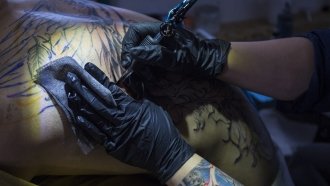 Have A Weakened Immune System? Reconsider That Tattoo

Bruns’s ink isn’t the only of its kind, either. In 2017, Harvard and MIT scientists developed an ink which could change colors based on pH levels and the prevalence of sodium, glucose, and hydrogen ions in the bodies. So far, both inks have only been tested on pig skins, though Bruns did tattoo himself with a since-removed sample.

"Figuring out how safe these are making sure that we're not poisoning anybody with the tattoos. And, yeah, doing our due diligence investigating the safety of these and making sure that they really are not harmful that they actually are healthy for people."