The Supreme Court Has A Lot Of Problems. Can They Be Fixed? 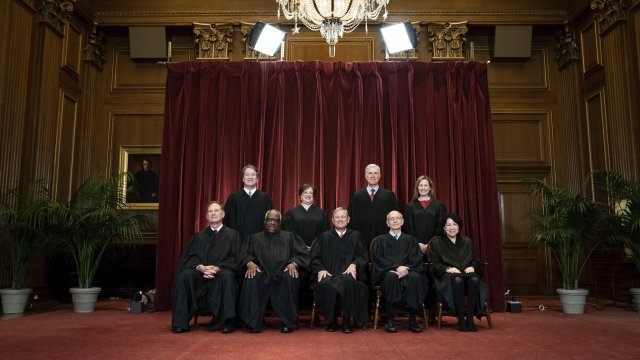 The Supreme Court has been back in the headlines recently, and it’s not just because of the historic nomination of Ketanji Brown Jackson.

There was also a much more controversial story, surrounding Justice Clarence Thomas and his wife, Ginni, and the story reveals something somewhat shocking about the nation’s highest court.

Between November 2020 and the insurrection on Jan. 6, Ginni Thomas repeatedly texted then-White House Chief of Staff Mark Meadows, urging him to overturn the election results.

This raised major red flags because one year later, her husband on the Supreme Court voted to block the release of White House records on the insurrection, which would likely include the texts with his wife.

While many critics cried foul at the conflict of interest, legal experts pointed out, technically, the Supreme Court has no code of ethics. In fact, it’s the only court in the nation that doesn’t have one.

Chief Justice John Roberts explained that he lets justices decide for themselves if they have conflicts of interest. There’s no external check on this.

The scandal comes at a time when public trust in the Supreme Court is at an all-time low. In a Pew Research study, only 16% of adults say that the justices do a good or excellent job of keeping their own politics out of their rulings.

This case has renewed calls from legal experts and prominent Democrats for major reforms of the Supreme Court — one of which would be establishing a code of conduct.

In another instance, although the court ended up not hearing the case, Justice Sotomayor failed to recuse herself from Nicassio v. Viacom, where Penguin Random House was on the side of the respondents. Sotomayor had earned over $3 million from her book contracts with Penguin Random House.

Some Congressional Democrats have called for Chief Justice Roberts to create a code of ethics by later this month — April 28 to be exact. Other Democrats are moving a step further, proposing legislation that would require a judicial ethics code. The bill so far has no Republican support.

Republican leaders have been particularly vocal against another proposed reform: expanding the number of justices on the court. The proposal is actually an old one, as FDR once tried to expand the court in 1937. Critics accused him of “court packing” to add more liberals to the court who would support the New Deal. The idea of court expansion only recently gained more popularity among some lawmakers and some legal experts, particularly on the left.

But it’s worth noting, court packing is not a one-party issue. Republican governors in Georgia and Arizona, both vocal against Supreme Court expansion, have recently expanded their states' supreme courts in order to create Republican majorities.

A third Supreme Court reform that gets a lot of attention is the idea of term limits. This has surprising bipartisan support among legal experts and the general public. Supporters say this would help the court adapt to the current ideological makeup of the country, but opponents argue this might actually make the Court more politicized and not less, nominations would become a regular election issue and justices might decide opinions to shape their post-judicial political careers.

The Supreme Court nominations do seem to have become recently politicized. Liberal Justice Ruth Bader Ginsburg was approved with a 96-3 split in the Senate, and Conservative Justice Antonin Scalia was approved 98-0.

There seems to be little consensus on what reforms are best or even possible. The Biden administration created a bipartisan team of legal experts to form the Commission on the Supreme Court.

"And I will ask them to over 180 days come back to me with recommendations as to how to reform the court system, because it’s getting out of whack," President Biden said.

Although the report did suggest establishing a code of conduct, even the commission could not definitively decide on a number of suggestions, like court packing or term limits.

As the Justice Thomas scandal has renewed momentum for reforms, the thorny debate over what those reforms will actually look like presses on.