The 'Missing Fourth Trimester Theory' Is Popular, But Is It True? 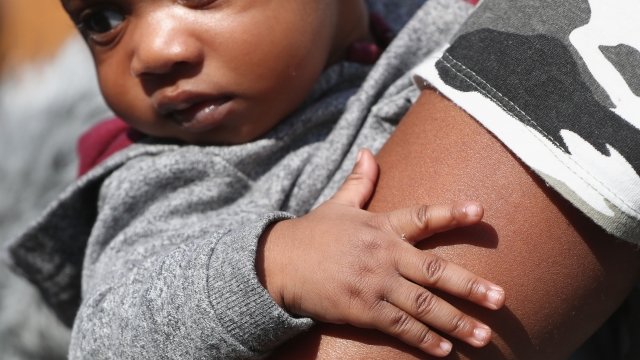 "The Happiest Baby on the Block" has become a bible for new parents thanks to its secret code of calming down screaming newborns. Pediatrician Harvey Karp wrote the best-seller and says we show up in the world before we’re ready, when we're still "smushy, mushy and very immature."

That we start out as a helpless blob is undisputed. But the reason why is about as clean as a chickenpox party. Karp argues we’re all born about three months early because our heads (i.e. our big human brains) won't fit through the birth canal otherwise.

Mothers have to "evict" the baby, unlike giraffes or elephants, which keep theirs in much longer. This means human babies experience a "missing fourth trimester" where only womb-like conditions can help them stop crying — for instance, being swaddled and jiggled and shushed loudly.

Karp has millions of acolytes, but other experts insist the reason birth takes place at nine months has nothing to do with the size of the baby's head, undermining the "fourth trimester" theory. They say it's the metabolic demands of the baby versus the metabolic demands of the mother. In other words, when the mother can no longer meet the baby’s nutrition needs and meet her own nutrition needs, the baby is born.

Regardless, human babies come into the world far less developed than a newborn chimp. And even if we needed to be that developed, it's perhaps possible. An article in the Scientific American explains, "To accommodate an infant at a chimplike stage of brain development ... the pelvic inlet (the top of the birth canal, which is the narrowest part) would only have to expand by three centimeters on average. Some women today have pelvic inlets that wide."

So why are we born at nine months? That's still being hashed out. No matter what you call the first few months, most parents would agree it's a tough stretch for everyone involved — for them and our angelic little blobs.