The Road To Recovery For Parkland's Humble Hero, Anthony Borges 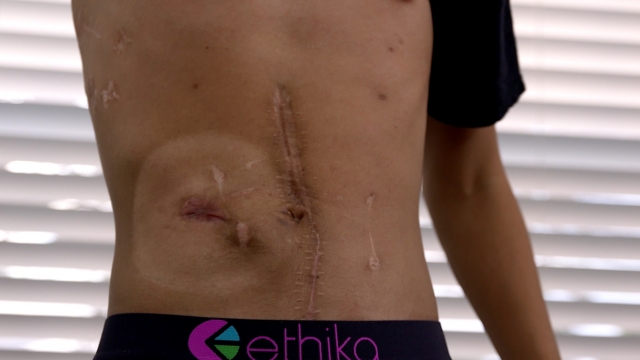 Borges took five bullets to his legs, torso and back. He was the most seriously wounded of the Parkland survivors.

A year after the deadliest high school shooting in U.S. history changed the national gun debate and even some gun laws, the difficult journey of Parkland political activists is well-known.

But away from the spotlight that politics brings, other Parkland survivors are undergoing very different, but equally tough, journeys. One of those survivors is 16-year-old Anthony Borges, who nearly died from gunshots while barricading a door to protect 20 of his classmates at Marjory Stoneman Douglas High School.

But he doesn't like to be called a hero for what he did that day because he says the credit doesn't go to him.

JAMAL: "Do you believe that's why you guys, why you're here today? The fact that God was looking out for you?"

ANTHONY: "Yeah, I believe that. For sure."

Borges' journey over the past year has been one of not only healing from ongoing emotional trauma, but physical pain as well.

Borges took five bullets to his body: three in his legs, one in his torso and one more in his back. He was the most seriously wounded of the Parkland survivors, and the last to leave the hospital. He had nearly a dozen surgeries that included removing part of his lung and putting a metal rod in his leg.

Scars run all the way down his left leg, and more criss-cross his torso and back, which he recently allowed to be photographed for a viral New York Magazine cover.

ANTHONY: "I feel comfortable to show my scars. It is a part of my life now. … Some people tell me, like, I'm not real. … I say, 'No dude, this is real. You can see the pictures. I did this to show the people that this is real, this is not fake.'"

Before he was shot, Borges was an elite soccer player hoping to play professionally. But the bullets left him unable to walk, much less run or play. He left the hospital in a wheelchair two months after the shooting and began physical therapy.

JAMAL: "What was that moment like when you walked again for the first time?"

Today, Borges can walk without crutches, and he'll be running soon. And after that? Maybe a little soccer.

JAMAL: "I'm wondering if there was, like, a moment at any point in time where you look back and were kind of like, 'Man I've come a long way?'"