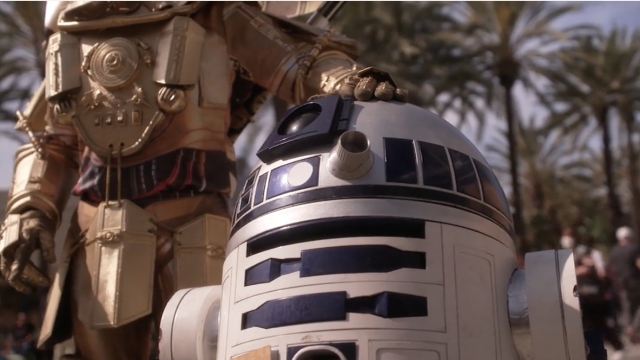 A long time ago in a pre-COVID galaxy that seems far, far away — crowded pop culture fan conventions weren't that unusual.

But, then came the pandemic shutdowns. And now, the biggest fan convention to open its doors since COVID slammed them shut is in Anaheim, California at Star Wars Celebration.

There, fans can rub elbows with Ewoks, troopers and Jedi, buy almost anything with baby Yoda on it or, if you're a high-roller, you can bid on a rare X-wing model used in the original movie 45 years ago.

"So when this goes up for auction, how much do you think it will sell for?" asked Brandon Alinger, COO of Propstore. "The pre-auction estimate is half a million dollars to a million dollars. As far as a full, intact ship, this is the only one."

"Star Wars is really a family drama," Keith said. "Without the Skywalkers, there wouldn’t be Star Wars, really."

They love Star Wars so much they started a father-son podcast.

"Star Wars is about love, about friendship, it’s about community, so that’s what we’re trying to push on our podcast," Kerwin said.

Some fans are there for the big reveals, like getting a first glimpse at the newest live-action Star Wars series called “Andor."

Ashley Fossile is so happy to be back with fellow diehard fans, she’s getting a second Star Wars tattoo.

Masks are required at Celebration, but aside from Darth Vader and some stormtroopers, most aren’t wearing them.

"It doesn’t worry me," said fan Mike Joiner. "Basically, here’s the situation. Everybody should take care of themselves, as well as, I think there are measures for safety as far as checking vaccinations, negative COVID tests. At this point, that’s really as much as you can do."