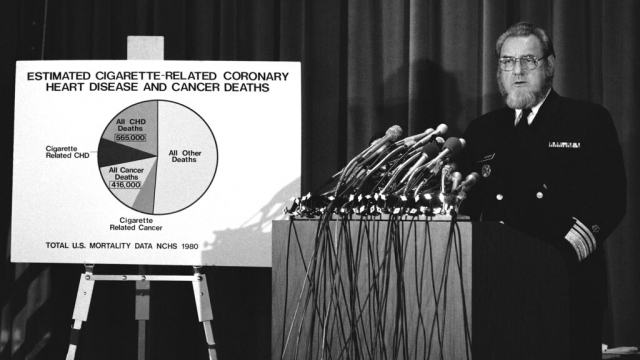 Once upon a time, cigarette smoke filled airplanes and restaurants and children rode carefree without a seatbelt in the backs of station wagons. That was then and this is now.

With an uptick in COVID-19 vaccine and mask requirements, there’s been a lot of talk about personal freedom vs. public health laws. So how did we go from the roller coaster ride in the back of Dad's Chevy Caprice to the five-point harness? It didn’t happen overnight.

Doctors started discussing the importance of lap belts in the 1930s. But widespread seatbelt laws wouldn’t come for another 50 years, after the Reagan administration put pressure on the auto industry.

“The auto manufacturers had to provide other safety precautions like side airbags unless X percent of the states actually implemented seatbelt laws. So that gave motivation for the manufacturers to go out and campaign for seatbelt laws,” said Dr. Bruce Y. Lee, a professor of health policy and management at CUNY SPH and executive director of Public Health Informatics, Computational, and Operation Research.

So the government pressured carmakers, who pressured the states and you ended up with cool ads like this.

“Just give it a click. Click it or ticket,” read a narrator in an Arkansas State Police ad.

But that doesn’t mean Americans were on board.

“This is going to affect my freedom, affect my liberty. And it's funny to think about that, because nowadays, people don't think twice about putting on a seatbelt,” said Lee.

Now nearly all states have some kind of seat belt law and additional laws for children except New Hampshire, where, even today, adults are not required to buckle up, though there are laws for children.  But the arguments here echo another freedom vs. safety debate.

"You see how easy it is to keep a man happy? Why not give your man a carton of Philip Morris cigarettes?" said actress Lucille Ball.

You wouldn't see an ad like this today. But it took years of research before the federal declaration that smoking was a problem.

“There is a very strong relationship, and probably a causal relationship, between heart disease and cigarette smoking,” declared former Surgeon General Luther Terry in 1964.

That declaration, known as the Terry Report, was followed by warnings on the sides of smokes and ads pulled from television. Surgeon General C. Everett Koop then led relentless government-sponsored campaigns to stamp it out completely.

“If I had my way I would say it was just as addictive as heroin or cocaine,” Koop said.

Koop pushed the idea that not only was smoking dangerous, secondhand smoke was a threat to others. Dr. Bruce Y. Lee says the industry didn’t go down without a fight or a little misinformation.

“There were statements by people who ultimately we found funded or were funded by the tobacco industry that claim that, 'Oh, there's no problem with with tobacco,'” Lee said.

It would take until the year 2000 to see smoking completely disappear from U.S. airplanes. Consumers also helped with the push.

“We got to a situation where there are enough people who didn't want smoking around them, and so you actually reached an inflection point. If your club or your restaurant allows smoking, then you're actually going to lose customers as a result,” said Lee.

Just like in the past with other health measures, Lee says current public health debates won’t gain acceptance until a majority of partners -- businesses, scientists, politicians and the public -- work together.