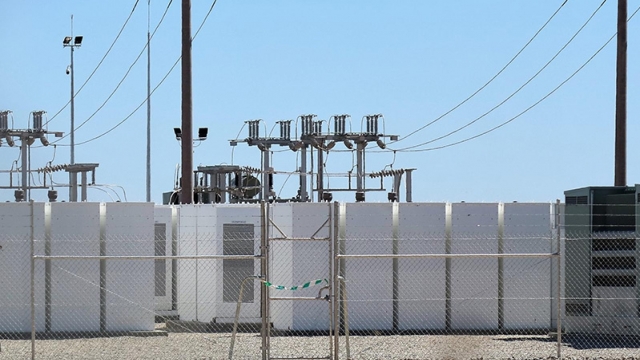 SMS
The Promising Future Of Battery Storage On The U.S. Grid
By Evan Thomas
By Evan Thomas
April 19, 2021
Battery storage is becoming a more viable tool for meeting peaks in energy demand — and it could do it in a greener, healthier way than fossil plants.
SHOW TRANSCRIPT

Today, when demand for energy surges, many utilities will turn to so-called "peaker plants" powered by fossil fuels. But high-capacity batteries are starting to meet more of that demand — and that could help clean up some of the dirtiest parts of the U.S. grid.

"They charge overnight or in the late morning," says Paul Denholm, principal energy analyst at the National Renewable Energy Laboratory. "They are fully charged by that 3, 4 p.m. period, and they can start to discharge to replace the energy that would have otherwise been generated from a peaking power plant."

And renewable-charged batteries are far cleaner than peaker plants — which can be heavy polluters even by fossil power standards.

Elena Krieger, director of research at Physicians, Scientists and Engineers for Healthy Energy, says: "One of the particular issues that we see with peaker power plants … is that a lot of them have higher emission rates for every megawatt hour of electricity generated than for some of your more baseload plants."

Research into peaker plants across the U.S. has shown that a disproportionate number of these dirty plants are in disadvantaged communities. Large or even smaller distributed batteries could help meet community power needs in a much healthier, more environmentally just way.

"If some of those batteries are also sited at, let's say, resilient community centers, or at homes that can provide backup, in the case of emergency or blackouts, you're going to actually get multiple benefits from those same resource," Krieger says.

To realize these benefits, regulators will have to set policy to help the transition away from fossil plants. California recently met an aggressive mandate for grid storage: 1.3GW by 2020.

"What the California storage target really did is that it opened up the market," Krieger says. "It made California test those out and demonstrated to a bunch of other states that this can work."

Now, those states are setting their own targets. The Energy Department estimates that if current policy trajectories hold up, there could be 17GW of battery storage in the U.S. by 2050 — much of it drawing charge from renewables to meet peak demand.

Denholm says: "They really do work well together — solar meeting the first half, storage meeting the the second half and combined, they can really eliminate the need for those peaking generators to meet that peak demand on those hot summer days."

It's hard to gauge the bite batteries could eventually take out of that demand across the U.S., but it stands to be a big one. Peak grid capacity is about a thousand gigawatts, and about a quarter of that is peaker plants.

"We're still talking about a very large number here," Denholm says. "There are significant opportunities for batteries to replace a large fraction of the peaking capacity in the U.S."