'The Post' Is Up For A Best Picture Oscar. But Is It Accurate? 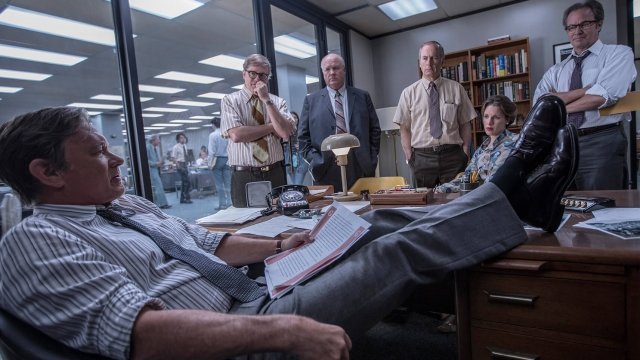 SMS
'The Post' Is Up For A Best Picture Oscar. But Is It Accurate?
By James Packard
By James Packard
March 1, 2018
Did "The Post" get it right about what happened when the Pentagon Papers were leaked?
SHOW TRANSCRIPT

If you've seen "The Post," you've probably wondered how accurate the Oscar-nominated film really is. Time for a fact-check.

In the movie, President Richard Nixon is furious at the leak of what would become known as "The Pentagon Papers," the documents that detailed how the government had been lying about the Vietnam War. In reality, Nixon was nearly unfazed by the leak at first because it looked bad for his Democratic predecessors. It wasn't until later that Nixon got angry about the leak.

On a tape of the phone conversation in which Deputy National Security Adviser Alexander Haig tells President Nixon about the leak, Haig says: "It's a mixed bag. It's a tough attack on Kennedy. It shows that the genesis of the war really occurred during '61."

"It's brutal on President Johnson," Haig says. "They're going to end up in a massive gut fight [sic] in the Democratic Party on this thing."

The movie also shows Robert McNamara trying to stop publication. McNamara was the former secretary of defense who commissioned the study of the war that became "The Pentagon Papers."

"Nixon will muster the full power of the presidency, and if there's a way to destroy you, by God, he'll find it," Bruce Greenwood as McNamara tells Kay Graham, played by Meryl Streep, in the film.

Actually, McNamara supported publication by The New York Times, and historians think it's unlikely McNamara pushed The Washington Post to stop publication, especially since he had a pessimistic take on the war at the time of the leak.

There are several other discrepancies between the theatrical version of the story and the real one, but those are the biggest.