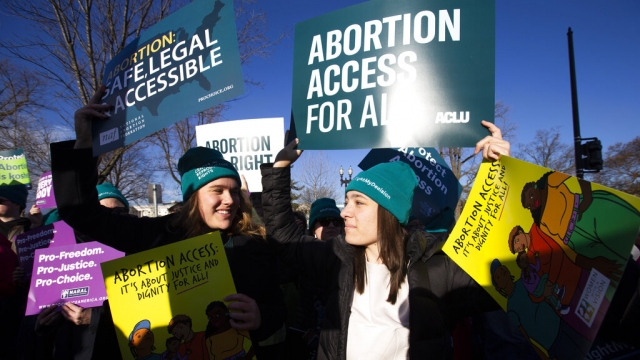 Many Democrats are looking to reverse some Trump administration abortion policies, but anti-abortion rights groups have found a new champion.

For many in the anti-abortion rights movement, President Trump equaled long-awaited progress.

“It is my profound honor to be the first president in history to attend the March for Life,” said former President Trump in 2020.

For those on the other side…

“Today, I am about to sign two executive orders. Best way to describe them: to undo the damage Trump has done,” President Biden said recently.

The Biden-Harris administration brings a sigh of relief for abortion rights groups.

Since taking office, President Biden has reversed the "Mexico City policy," which kept U.S. dollars from funding health care providers in foreign countries that offered counseling or even referrals for abortions.

And he ordered a review of his predecessor's rule on Title X, a move that led groups like Planned Parenthood to lose some federal funding.

That’s the reality with some of President Trump’s anti-abortion initiatives: They can be undone. And exactly why some Democrats are hoping to use their new position of power to enact long-lasting changes.

“I myself have been an opponent of the Hyde Amendment long before I came to Congress,” said House Speaker Nancy Pelosi.

One focus is to get rid of the Hyde Amendment, a ban on the use of federal funds for abortion coverage except in the case of rape, incest or if the mother’s life is at stake. It’s not an actual law but a provision that’s been added to spending bills for more than 40 years.

“The Hyde Amendment has burdened Black and Indigenous people and other people of color for decades, limiting access to abortion care for those enrolled in the Medicaid program in the Peace Corps, military and others,” said Jamille Fields Allsbrook, the director of women’s health and Rights at the Center for American Progress.

Having the ball in their court isn't going to make things easier for progressives. In January, 200 House Republicans signed a letter vowing not to support any spending bills that eliminate Hyde. Even if it were to pass the House, they’d need 60 votes in the Senate, unless, of course, they got rid of the filibuster rule. Enter West Virginia’s Joe Manchin, a Democrat who recently flexed his political muscle all but killing the chance of confirmation for the president’s budget director.

“Our pro-life values are under attack. Thankfully, Sen. Joe Manchin is standing strong for life,” read a narrator.

So they’re throwing their focus and a six-figure ad campaign toward wooing the potential make-or-break voter.

Anti-abortion rights groups have also set their eyes on the states. Recently, a South Carolina law that banned most abortions after the six-week mark was temporarily struck down by a federal judge. But it’s not a loss for these groups who hope cases like that end up at the Supreme Court, where there’s a 6-3 Republican-appointed majority. The judicial branch is part of the former president’s legacy that will be harder for progressives to erase.