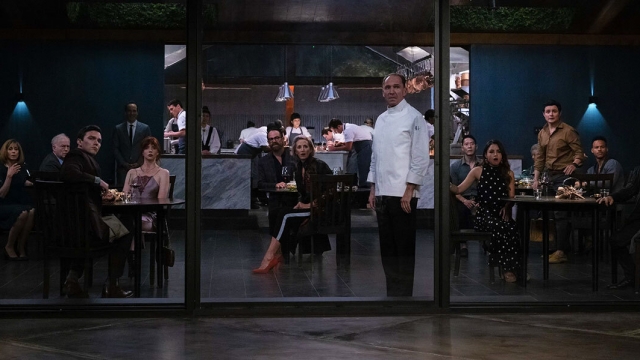 Served first at the Toronto International Film Festival, the movie is in theaters this weekend.

With "The Menu," Mark Mylod goes to extreme lengths to metaphorically flesh out the phrase "eat the rich" without actually making it literal. Mylod, an executive producer and frequent director of the HBO dark comedy series "Succession," is following a similar blueprint of success here — capitalizing on a hilariously biting screenplay (from Seth Reiss and Will Tracy) while utilizing the talents of a very game ensemble cast.

Obnoxious foodie culture is the conduit for the messaging in this class satire, with a group of elites (among them Nicholas Hoult, Judith Light, John Leguizamo, Janet McTeer, Rob Yang and Reed Birney) yachting to a remote island to dine at renowned Chef Julian Slowik's (Ralph Fiennes) exclusive restaurant. Anya Taylor-Joy's Margot is the audience surrogate, the only member of the group who recognizes the absurdity of this supposedly impressive fine dining experience. She's also an unexpected guest for the evening, as Tyler's (Hoult) last-minute date and plus-one. The regimented and ruthless Chef Slowik doesn't like surprises.

Five years after the emergence of the #MeToo movement, the story that started it all is getting a treatment on the big screen.

To further set the scene, this island very clearly has a vibe that once you're on it, you're not getting off until Slowik and his team of devoted sous chefs are finished serving you. They live on the island. They work around the clock. Concerns are handled by maitre d' extraordinaire Elsa (Hong Chau, excellent as usual), using her threatening aura as a blunt instrument to ensure the island's esteemed guests obey. All of this is to say something isn't quite right from the onset, but it's a lavish dinner worth gobs of money, so the ultra-wealthy guests just excuse ominous signs as eccentricity.

Chef's menu starts as a ridiculous venture in molecular gastronomy that impresses all the bootlicking diners aside from Margot, then increasingly gets more sinister; I'm talking blood spatter and carbs with incriminating information about the guests imprinted in the dough. Eventually, these dense, pretentious foodies begin to realize they can't explain everything away as just being part of chef's elaborate presentation. Slowik has some kind of grotesque ulterior motive for this particular dinner.

The great Ralph Fiennes gets to have fun playing Slowik, the most nightmarish Food Network-esque celebrity chef you could imagine, and it's a lot of fun watching him. Ultimately, this is Taylor-Joy's movie, as the longer the evening of tasty terror lasts, the more the film pits Margot directly against Slowik.

Major romantic comedy theatrical releases this year have been quite limited.

To state the obvious, Taylor-Joy ("The Queen's Gambit" and "The Northman") is having a bit of a moment (since at least 2020) and makes Margot relatable and really easy to root for, especially considering the company she's with. Hoult is also great at being inherently unlikable and snobbish, in a way that's outrageous enough to crudely satirize a trust-fund man-child, yet realistic enough that you may be reminded of your foodie friend whose Instagram feed is only pictures of their dinner (guys, please, enjoying food is no more a personality trait than drinking coffee).

As disturbing and weird as "The Menu" gets, it's never not hilarious. The constant laughs make the viewing experience even more deranged, given what we're watching these characters go through. The visual gags, meanwhile, are oftentimes even more laugh-out-loud absurd than the dialogue, which itself is brutally funny. Maybe it's because I've never considered myself a foodie or gotten into cooking competition shows, but I found Mylod, Reiss and Tracy's use of this world as a way of lampooning ignorant elitists very clever. "The Menu" does more of what I would've liked Rian Johnson's "Glass Onion" to have done, in that "The Menu" feels like a smarter, more well-earned statement about how privilege and ignorance can oftentimes be intertwined.

"The Menu" isn't perfect; the dessert portion of the film is a little messy and muddled, and it feels like Mylod didn't know how to quite wrap things up. But the movie sticks out from other satirical social commentaries as fresh, smart and sadistically fun. It's a good time at the movies, highlighted by memorably ridiculous moments and pitch-perfect performances from its stars. Yes, chef!