The Male Beginnings Of 'Feminine' Fashion 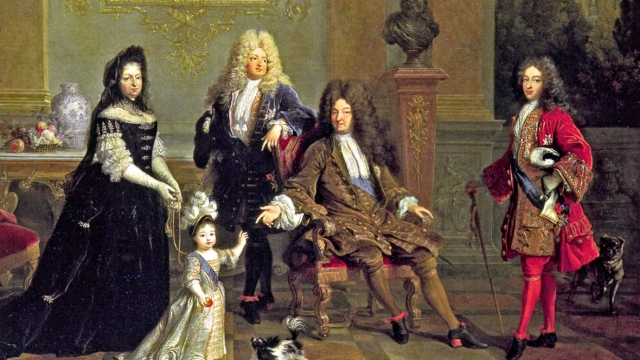 High heels are worn by tens of millions of women every day — but the style started with men. Same deal for the color pink. Wigs, silk stockings? Fashionable with the Founding Fathers in the 18th century.

Time and again, you find a fluidity in fashion: What was once "manly" might be considered feminine today, and vice versa. High heels are a prime example. Their origin is function, not fashion. During the 15th century, Persian soldiers wore high heels for support in their stirrups as they shot arrows while galloping on horseback.

A century later, the Persian Empire had expanded. Heeled shoes caught on in Western Europe. King Louis XIV of France — maybe the first modern fashion icon — took the throne in 1643. With long, curly hair and iconic red high heels, Louis was an early "influencer." Today, the coveted "red bottom" heels are a nod to his bright red heels, which only his favorite nobles could wear. And by the way — it was illegal to own heels taller than his highest pair — which were five inches.

The Founding Fathers were partial to powdered wigs — a status symbol. Not only did they make the men look older — and thus, wiser —  but they were expensive. If you had one, you were considered high class. Today, lots of men shave their thinning hair, but baldness hasn't always been so culturally acceptable. Louis XIV hired a team of 50 wigmakers. King Charles II of England did the same. The diadem can't possibly sit on a shiny royal dome.

And what about the color pink? The Plastics have some fellas to thank for their signature look. In 19th century England, pink was seen as a "junior red” and was common for boys to wear. Even in the 20th century, pink was seen as a "stronger color," and more suited for boys. Blue was actually seen as daintier and more feminine.

No one seems to know what caused the flip, but by the 1940s, clothing catalogs were pushing "pink for girls, blue for boys." And men's fashion continues evolving. Skinny pants, crop tops, floral prints — not long ago "for women only" — are once again for the gents. Plus, things like plastic surgery are way up in the male population. Doctors say men are going for the classics, but also the Insta-look fuller lips, prominent cheekbones.

The fashion churn never ends, and when it comes to the sexes, what goes around comes around.