The Life-Changing Effect Of Poetry 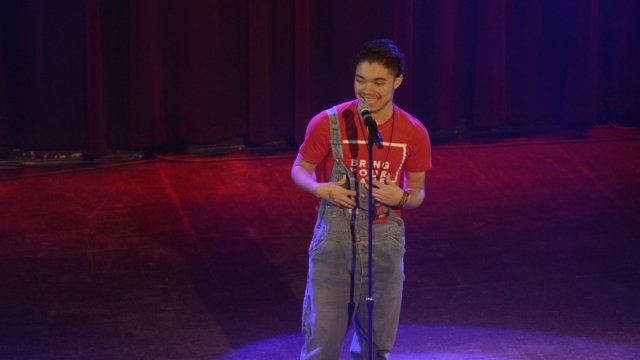 Levi Miller, a high school student, performs verses about poverty and therapy. He is set to compete at the largest youth poetry slam competition.

Levi Miller is an 18-year-old senior in high school who says poetry changed his life. His poem "Therapy Verses" reads: "I have a suicidal mic. And it loses more veins, every time I write. When I was nine, 50 Cent said real gangsters don't cry, but I'm older, and I wanna hear difference in my favorite rappers rhymes."

For 27 years, Young Chicago Authors (YCA) has given teens like Levi a safe space to express themselves through writing and spoken word, both in and out of the classroom. Every year, YCA educates 10,000 young poets in the Chicago area. Its most famous alumnus is Chance the Rapper.

"I'm a lot wiser. I understand things clearly," Levi said. "And I feel like I can cope with things that I wouldn't have been able to cope with. …. Before I was on it, I was failing classes. And now, I'm an honor roll student." Before writing verse, Levi says he was a "bad kid" with an attitude who got into fights. Levi lives with his grandma and his sister in Oak Park, Illinois — a suburb of Chicago. Levi's grandma Pamela Heard said there was a huge difference before and after Levi started writing.

"He has issues with his father, so he struggled a little bit," she said. Pamela added Levi's father lives in North Carolina and struggles with heroin addiction. Levi's mom lives nearby in another Chicago suburb.

Young Chicago Authors alumnus and staff member Jose Olivarez said: "I just remember being blown away by how tenderly Levi was writing about various family situations and about poverty and growing up in the middle of this. ... That was not based in stereotype, that was not based on trying to gain someone's pity but was just based in the act of witness and the act of documenting what that life really is."

The annual Louder Than a Bomb poetry competition, a joint venture by YCA, brought 1,000 youth poets from 100 schools in and around Chicago to compete for five weeks. It is the largest youth poetry festival in the country. And while there is more of a focus on self-expression instead of the scores, it's still a competition. Levi and his Oak Park and River Forest High School classmates competed and won second place. Gwendolyn Brooks College Prep won the competition.

Adam Levin, Levi's coach, said: "It's not about the scores. … It's about have you told your story in a way that honors it and does it impact other people? … It saves lives. I've seen it happen. It happened to me ... that's where the value of slam poetry and spoken word is and realizing that self-expression can save kids, especially kids who need it."

As a senior, this is Levi's final year to compete. After he finished performing poetry on stage in front of about 4,000 people, he said: "I feel like no matter how low I am, I can always find a way to be where I want to be, you know? Like, I started out nowhere and I ended up performing here at the auditorium theater. I was just failing classes as a freshman and I'm here. It's kinda crazy. I feel like I can do anything if I tried."