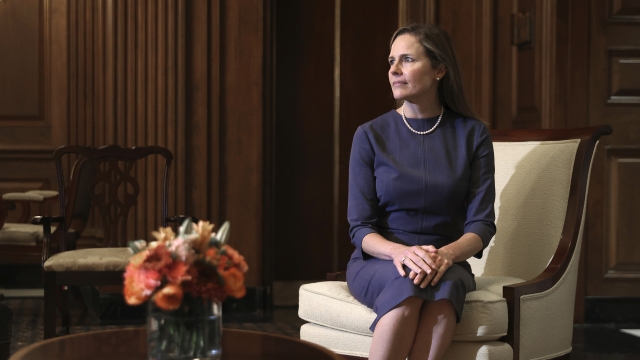 Even before her nomination, there was speculation about Judge Amy Coney Barrett, who she is, and how her views could impact the future of the Supreme Court.

Long before the Rose Garden nomination event or her 2017 appointment to the 7th Circuit Court of Appeals, the 48-year-old Louisiana native made her way as a clerk, including a year-long stint with the late Supreme Court Justice Antonin Scalia, whom she says helped form her originalist views of the Constitution.

“His judicial philosophy is mine too. A judge must apply the law as written, judges are not policy makers,” remarked Barrett.

She went on to practice law in D.C., eventually accepting a teaching position at her alma mater Notre Dame Law School.

There’s been a lot of focus on Barrett’s Catholic faith and how that could weigh on any potential court decisions.

In 1998, she co-wrote an article saying Catholic judges are morally precluded from enforcing the death penalty.

In 2006, the mother of seven joined more than 1,000 others who signed a letter appearing in the South Bend Tribune opposing abortion on demand.

And since her appointment to the Chicago-based Court of Appeals, Barrett joined the dissent in a case involving an Indiana law that banned abortions motivated by disabilities like Down syndrome.

“Some are wondering whether this was the superspreader event," said a NBC News anchor.

While Barrett’s potential decisions are being debated, it’s her nomination ceremony that has garnered headlines.

Among that list, two Senate Judiciary Committee members: Thom Tillis and Mike Lee. Their illnesses prompted Democrats to say Barrett’s confirmation hearing should be postponed due to safety concerns.