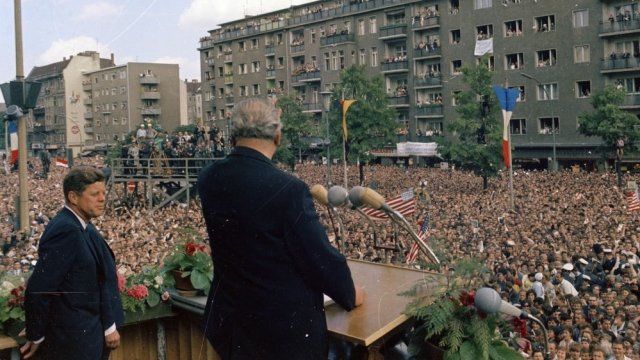 John F. Kennedy said the Berlin Wall was "an offense against humanity, separating families ... and dividing a people who wish to be joined together."

Fifty-five years ago today, former President John F. Kennedy gave a speech to 400,000 people in Berlin. That speech boosted morale in West Germany, where the wall was built just two years prior.

"While the wall is the most obvious and vivid demonstration of the failures of the Communist system, for all the world to see, we take no satisfaction in it," Kennedy said in Berlin in 1963. "For it is, as your Mayor has said, an offense not only against history but an offense against humanity, separating families, dividing husbands and wives and brothers and sisters, and dividing a people who wish to be joined together."

"All free men, wherever they may live, are citizens of Berlin, and, therefore, as a free man, I take pride in the words 'Ich bin ein Berliner,'" Kennedy said.

Beyond morale, the speech also inspired significant international policy. Two months later, the Limited Nuclear Test Ban Treaty was signed to curb the testing of nuclear weapons. And more than two and a half decades later, the Berlin Wall was torn down.

"I welcome the decision by the East German leadership to open borders to those wishing to enter in or travel," former President George H.W. Bush said during a press conference.

The White House hasn't offered support for the bill just yet, but it seems to meet a number of President Donald Trump's demands.

As of February 2018, the Berlin Wall has been gone longer than it stood, and lawmakers have used its history to criticize President Donald Trump's border wall plans.

Back in 2017, the mayor of Berlin said in an open letter to the U.S. president: "We Berliners know better than most the pain caused when a whole continent is split by barbed wire and walls. ... I call on the president of the USA not to go down that road to isolation and ostracism."

That sentiment is echoed by other critics, who argue that walls can be faulty instruments of diplomacy — faulty because they may not work to permanently solve issues like illegal immigration or national security threats. In Trump's view, a wall could help solve both those issues.

"But the border wall is truly our first line of defense, and it's probably, if you think about it, our first and last, other than the great ICE agents and other people — moving people out," Trump said in March.

Going forward, Republicans are expected to vote this week on a compromise immigration bill. It would set aside $25 million for border security, which includes Trump's wall.