The Impatient Person's Guide To The End Of The Universe 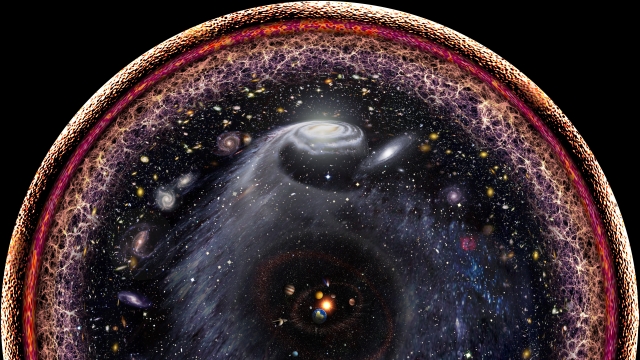 Here's a thought: Someday the universe will end. And thanks to modern physics, scientists already have several theories on how.

We'll start with the three simplest theories, which all come from a basic observation about the universe: It's expanding. Most galaxies are getting farther and farther apart as space itself gets larger and larger.

If you take that fact and project out billions of years, there are three basic ways the process could end.

In the first scenario, the expansion slows down. The galaxies eventually get pulled back together, kind of like the Big Bang in reverse. All matter and energy collapses back into a hot, dense ball, mirroring the universe's earliest moments.

This seems like the least likely scenario nowadays because new observations show the expansion is actually speeding up, not slowing down. That leads us to the second scenario.

In the second case, the expansion speeds up exponentially as the forces driving it become stronger. It becomes so fast that galaxies aren't the only things being separated. Stars, planets and eventually even atoms would be pulled apart by the expansion.

"It will eventually overcome everything, and you'll have a universe with nothing left," physicist Thad Szabo of Cerritos College told Universe Today's Fraser Cain.

The third outcome is that the expansion will occur at just the right rate to keep No. 1 and No. 2 from happening. The galaxies will get farther apart, but there won't be any catastrophe at the end. Instead, those galaxies will more or less die of old age.

The stars will burn until all fuel is used up, planets will float around until they crumble or fall into black holes and the black holes themselves will slowly evaporate, leaving a cold and empty void.

"The universe will end not with a bang but with a whimper," astronomer Neil deGrasse Tyson told Bill Moyers.

Right now, No. 3 seems most likely, but that could change. There are a lot of unknowns about expansion that could affect our universal forecast.

But there are theories on the end of the universe that have nothing to do with expansion.

Remember the discovery of the Higgs boson in 2012? Well, it turns out the Higgs' newly discovered properties just happen to fit a formula predicting a different kind of doom for our universe. Here's how a physicist who worked on the Higgs discovery put it:

"At some point, somewhere, spontaneously, out in the vacuum of space … there'll be a little bubble that will form. … It will expand at the speed of light, and it will keep doing that, and nothing will stop it until it completely wipes out everything that's already here," Joseph Lykken of Fermilab said in a lecture to the Academy of Science of St. Louis.

The "bubble" in that scenario is basically a replacement universe that functions very differently from ours. Life most likely wouldn't be possible there, but at least there's something left over after our universe ends.

Just to put your minds at ease, it's worth remembering that all of these end-of-the-universe scenarios take place billions of years in the future — except the Higgs boson bubble thing, which could happen at any time.