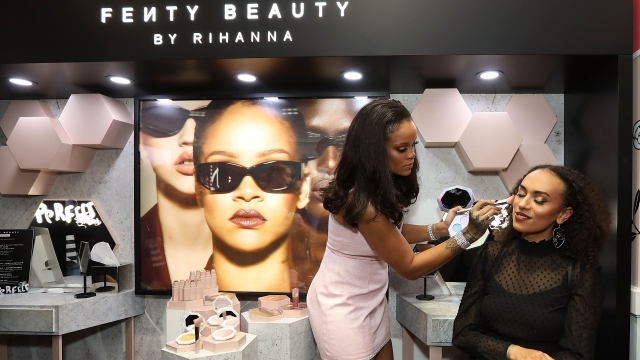 SMS
The Hustle Rundown: Fenty Finds A New Partner; Helium Stashes Shrink
By Newsy Staff
By Newsy Staff
May 14, 2019
The Hustle's Wes Schlagenhauf breaks down some of the biggest business news of the week. He explains what's next for Rihanna's Fenty brand.
SHOW TRANSCRIPT

Last week, French luxury brand LVMH (aka Moet Hennessy Louis Vuitton) added Rihanna’s beauty line to its lineup of high-end products. This makes her the first female partner ever to launch an LVMH brand, as well as the brand’s first in-house company to debut since 1987 when it was founded.

I don’t know if that’s awesome, or super embarrassing for LVMH — wait, yes I do, it’s both. But great for Rihanna's Fenty line of cosmetics, and that's all that matters.

Rihanna created Fenty to provide more inclusive cosmetics options. After launching in 2017 with 40 different skin tones, Fenty brought in more than $550 million in revenue in its first year by itself. Fenty's massive success inspired LVMH to invite Rihanna to launch a new brand under the luxury company’s ultra-exclusive umbrella — see what I did? Okay, I’ll stop.

And just when you thought there weren't any more barriers to break, the partnership also makes Rihanna the first woman of color to run an LVMH line. Glad you’re finally seeing the light, LVMH. Maybe now I’ll buy your $1,000 Louis Vuitton airpods — That was a joke; no I won’t.

But, since Boston Beer is one of the 10 largest breweries in the country, beer heads argue it isn't true craft — leading many on Facebook to trash Dogfish Head for selling out.

In other words, like all snobs, beer snobs are also super fun to hang with — so what counts as "craft" beer?

The verdict is in: Boston Brewing Co. is a craft beer establishment. Don’t like it, go brew your own beer, then when a massive company throws $300 million in your face — don’t take it. That’ll show ‘em.

Now, Party City has to close 45 of its stores — tripling the number it usually closes per year. But don’t worry, this isn't because the party’s dying. The stores they're closing are actually profitable — there’s just a global helium crisis.

Turns out the second-most-abundant element in the universe has been running low for years down here on Earth — why?

Well, helium is a non-renewable resource that floats, and if you've ever tried to can floating gas, you’d know it’s not easy. Now that helium reserves are being depleted — the Bureau of Land Management has had to ration its supplies.

And, aside from blowing up balloons, helium is also vital for several medical applications — like MRI machines — so, it makes sense that balloon fuel falls to the bottom of the helium priority list.

But don’t worry, after digging through couch cushions, Party City signed an agreement with a new helium hook up that is expected to hold it over for at least the next 2.5 years. But, even with the new source, balloons won’t start inflating again until the summer. That’s bad news for Party City, because with springtime comes graduations — aka peak balloon season, people!

And that does it for today, folks. Be sure to tune in next Thursday at 1 p.m. Eastern here on Newsy, and if you’re looking for more heavy biz hitters like this, sign up for The Hustle newsletter @thehustle.co.