How Did Climate Change Become Such An Issue For 2020? 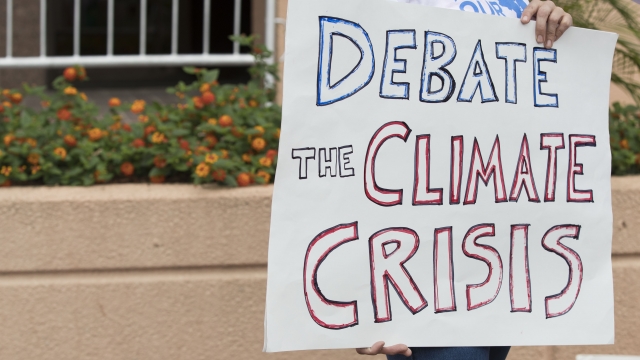 In the last decades and especially in the last few years, addressing climate change has become a flagship political issue.

There's something unique about this election cycle: The focus on addressing climate change is greater than ever. But like climate change itself, this new awareness doesn't have a single cause. It took time and lots of different influences for the political conversation to get to this point.

Presidential candidates have acknowledged climate change before, but rarely in depth. One Grist analysis of presidential debates shows in 2000, candidates spent less than 15 minutes on climate issues. In both '04 and '08, there were roughly five minutes of climate talk. Barack Obama and Mitt Romney didn't mention it on stage at all in 2012, and it got a little more than five minutes' time in 2016.

But in two decades, warnings from the world's climate scientists have become more urgent. The Keeling curve, which measures the atmosphere's carbon dioxide content, has marched steadily higher. And, crucially, news and media outlets have highlighted more climate stories.

Max Boykoff is a director at the Center for Science and Technology Policy Research, where he studies media's changing coverage of climate change.

Boykoff says the media started to put more focus on climate in the late '80s, just as NASA scientist James Hansen was testifying to Congress on the impacts of global warming. Since then, coverage has only gotten broader and more comprehensive.

"I think that there has been an increasing general sophistication in coverage that we hadn't seen maybe two decades ago," Boykoff told Newsy. "Climate change is something that that permeates other critically important issues, from geopolitics to immigration policy to public health and so forth and so on. And so the reporting has now been more distributed across many different parts of any news organization."

Together, these forces have helped drive a primary race that's starkly different. Democratic candidates want climate change on center stage. Now they'll spend hours of airtime on it before they even get to the general election.

And the action they've proposed is ambitious and detailed. Prior to dropping out of the presidential race, Washington Gov. Jay Inslee centered his entire campaign around the climate threat. Active candidates still have some of the most thorough climate plans ever floated.

"The [Bernie] Sanders proposal and the [Elizabeth] Warren proposal are the most bold and ambitious, that they come closest just on climate terms alone, to putting together that kind of comprehensive, sustained response that is commensurate with the scale of the challenge," Boykoff said.

The American Conservation Coalition is hoping to prove it's not just Democrats who care about the environment.

Ultimately, the way forward will be up to voters, and for some cohorts climate is a bigger deal than before. An original Newsy-Ipsos survey found an overwhelming majority of Gen X and Millennial voters on both sides of the aisle agree: Humans are driving climate change.