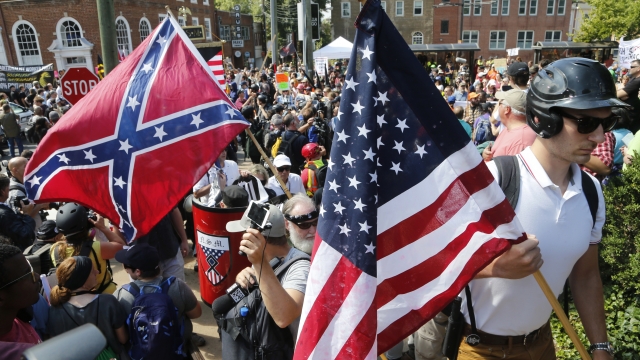 SMS
The Role Of The 'Great Replacement Theory' In American Extremism
By Kellan Howell
By Kellan Howell
May 16, 2022
A theory that White Americans are being replaced by nonwhites once lived on the dark web. Now it's in right-wing media and pushed by some GOP members.

Black churchgoers in Charleston, Hispanic shoppers at a Walmart in El Paso, Jewish worshippers at a synagogue in Pittsburgh — mass shooting victims, like those killed at a grocery store in a predominantly Black neighborhood in Buffalo, New York, were all targeted by gunmen citing racist fears of a conspiracy to "replace" White Americans.

In his 180-page manifesto, the suspect in the Buffalo shooting cites a "great replacement" — a conspiracy theory that White Americans are slowly being replaced by nonwhites through immigration, interracial marriage, and eventually a race war.

Experts say the rhetoric, once confined to the dark web, has penetrated right-wing media and is being pushed by some members of the GOP.

"There is almost always a direct line from some dark conspiracy theory on 4chan to something that's being said in the mainstream media every day," said Wendy Via, co-founder of the Global Project Against Hate and Extremism.

Fox News' Tucker Carlson has promoted replacement theory frequently on his show, positing that Democrats want to influence elections by "importing" voters from other countries.

"I mean, everyone wants to make a racial issue out of it," Carlson said. "Oh, you know, the White replacement theory? No, no, no. This is a voting right question. I have less political power because they are importing a brand new electorate."

A New York Times investigation found Carlson amplified this theory in more than 400 episodes of his show, and some high-ranking Republican politicians have adopted similar rhetoric in campaign ads and on social media.

Like House Republicans' third-highest ranking member Elise Stefanik, who last year ran a Facebook ad claiming Democrats were planning a "permanent election insurrection" by creating a pathway to citizenship for immigrants to ensure a liberal majority in Congress.

A spokeswoman for Fox pointed Newsy to Carlson's comments on his program denouncing political violence, and a Stefanik aide said the congresswoman has "never advocated for any racist position."

But other members of the GOP have taken notice – like Republican congresswoman Liz Cheney, who blamed Republican leadership for enabling "White nationalism, White supremacy and anti-Semitism."

While it may not stop the hateful information from spreading, Via says calling out racist rhetoric is the first step to stop extremism.