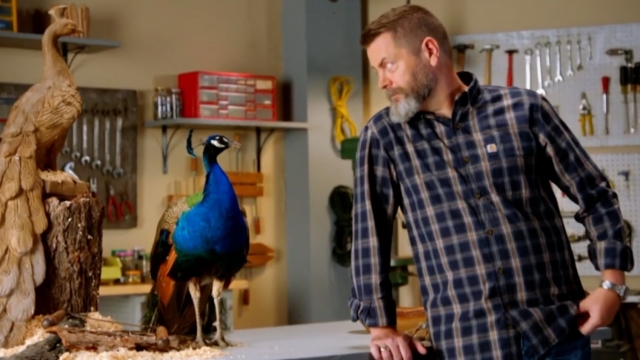 SMS
The Future Of The Streaming Industry? Advertisements.
By Casey Mendoza
By Casey Mendoza
September 23, 2019
"Customers, when presented with, like, a 'freemium' model versus paid, often choose free until the point that it's inconvenient."
SHOW TRANSCRIPT

"I've been at NBC a long time. I've seen so many groundbreaking comedies here, and you know what they all have in common? The peacock."

Earlier this year, NBCUniversal unveiled some details behind its own foray into the streaming industry. The service? "Peacock." ["Thank you."]

If you've been following the streaming industry, you're likely thinking to yourself, "Oh no, not another platform!" But Peacock may have one advantage to help it stand out.

It's not "Parks and Recreation," nor is it "The Office," but it is a bit of a throwback: advertisements. ["No! God!"]

It may not make sense — especially when you consider commercial-free platforms like Netflix or the fact that nearly 90% of viewers skip through ads anyways — but let's break it down.

"Customers, when presented with, like, a 'freemium' model versus paid, often choose free until the point that it's inconvenient. ... The idea would be to convert them to a paid subscriber at some point, or maybe not at all, if they can increase the ad revenue to the place of where they're replacing sort of syndicated television or network television ad sales."

NBC's Peacock "will be both advertising- and subscription-supported," and it'll be free for Comcast customers. That makes it starkly different from its competitors, which are almost entirely subscriber-supported.

Hulu does have an ad-supported plan, but subscribers still need to pay to access it.

From the perspective of viewers, that makes Peacock the cheapest option simply because it'll likely cost nothing. The exact price for the premium, paid plan will be announced in 2020.

From the perspective of NBC — one of the oldest, most traditional television companies entering the streaming race — having an advertising element isn't just competitively different, it's familiar.

"When you have sort of traditional television companies, historically their revenues have come from advertising. And they have better relationships with advertisers, right? Through the upfront process that they've been doing for 60 years."

Beyond NBC, other traditional television companies like Viacom and Sinclair are also investing in ad-based streaming. The former spent $340 million to acquire Pluto TV earlier this spring, while the latter is suspected to be bidding on Xumo.

With all of that in mind, industry experts are calling the ad-based market a "gold rush" for media companies, as well as a reprieve for "bill-fatigued viewers."