The Front-Line Fight Against Racial Disparities In Health Care 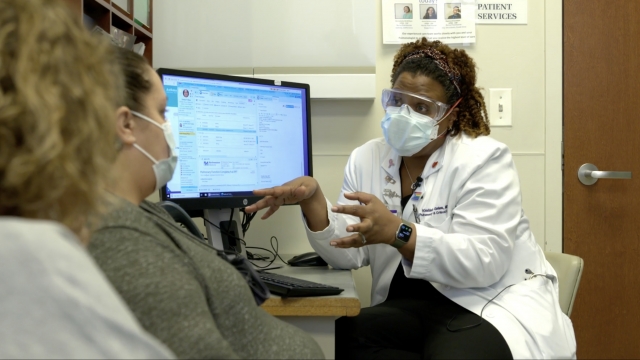 Dr. Khalilah Gates cares deeply about others. She first knew she wanted to practice medicine at age 6.

"I don't know where that came from. There was no life-changing event," she said. "I like to think of it as I've known my purpose for a while now."

Today, patients with chronic lung disease, asthma and COPD visit her at Northwestern Memorial in Chicago.

She also works in the hospital's intensive care unit.

"The last two years has really challenged us," she said.

And that's just part of her purpose.

Since March 2020, Gates has logged more than 500 interviews and talks, from national news to her west Chicago community, on the ever-changing COVID-19 science — all to fight misinformation. She's started a health podcast with a pair of doctors, too.

Her other battle is visible at all times.

"As a Black woman in this society, I've always seen and/or experienced medical bias," Gates said.

Research shows the health care system is full of medical bias — against race, ethnicity, sex, and disability. It can lead to poor patient care.

"Having older family members, something didn't feel right or I didn't like the way that person spoke to that family member. Or that part of my family in that location doesn't have the same resources and access," Gates said.

White doctors can take longer to correctly diagnose Black women compared to other patients. The difference at times is life and death.

Another study shows half of medical students and residents thought Black people don't experience pain the way other races do. That's not true.

This unfounded belief dates back to colonial times. It's created harrowing consequences like medical experimentation on Black people and as a result, distrust of the medical community.

Patients may seek out doctors of their own race or ethnicity, but it can be nearly impossible.

In 2019, just 5% of doctors self-identified as Black. That statistic is barely up over the past 118 years.

And among lung specialists, like Gates, the disparities have worsened.

In the time she's been treating patients — about a decade — the number of racially underrepresented pulmonary and critical care fellows and residents has dropped by more than 10%.

Until last August, Gates was the only Black woman in her division.

"You know, how many times can you walk into a patient's room in your white coat and be handed the tray?" she asked. "I have come to acknowledge and move on. And I do that because perseverating over it doesn't change it. Action is going to change it.

"We all know disparities were there before COVID-19," she said.

Gates says its not just about new med students. The number of first-years identifying as Black or African American was up more than 20% in 2021. For Gates, it's about reaching the "old school."

"Our culture is changing; our society is changing. We have to adapt to that as well," she said.

Gates says that adaptation is happening slowly but surely.

And hopefully, she adds, in her daughter's lifetime.

Five-year-old Layla has told mom she may want to be a doctor when she grows up.

"She is what I am doing this for," Gates said. "I just want things to be better for her."

It's a future Gates is looking forward to.

"We all have biases and they're impacting care, and that's not the right way to do this," she said. "I will continue to do the work as long as I'm able."

She's fulfilling her purpose one person, one student at a time.