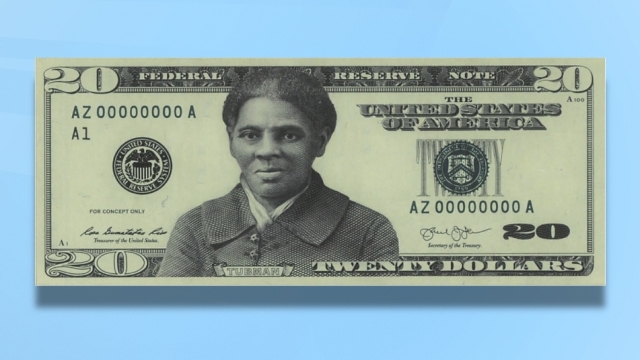 SMS
The Face Of An American Patriot: Tubman To Grace $20 Bills

Amid a national reckoning on race, the U.S. is taking a closer look at who it holds up as an American patriot.

"She had an attitude of 'I am here and so I’m gonna make this country what it should be for all of us,'" said Ernestine Wyatt.

Wyatt is Harriet Tubman’s great-great-great-grandniece. Her Aunt Harriet is set to replace President Andrew Jackson on the $20 bill.

"It's going to exemplify her contribution as an American patriot … Aunt Harriet stood for America too. ... You know, if you want to change then you have to be the change and that’s what she did all her life."

But it turns out that's a long process involving design reviews and counterfeit prevention measures. Wyatt is hoping the new bill will be ready in time for Tubman's bicentennial birthday next year, and she's been talking to President Biden about it.

"He said that I would not have to remind him about his promises," Wyatt said.

The Biden administration reintroduced the Obama-era effort after the Trump administration put it on pause. Now the Treasury Department is trying to speed up the process.

White House Press Secretary Jen Psaki said, "It's important that our notes … reflect the history and diversity of our country, and Harriet Tubman's image gracing the new $20 note would certainly reflect that."

The current face of the $20 bill, president Andrew Jackson, owned hundreds of enslaved people and pursued policies on forcibly moving Native Americans, leading to the Trail of Tears.

Historian Kate Larson said, "Some people like to elevate his status as 'the man of the people' but he was a man of White people ... He did amazing things, yes, as president but also the stain of what he did smears the anything that he did that was good."

"She really is an American icon, a patriot like who’s supposed to be on our currency – these American Founding Fathers and patriots," she said. "And to have a woman of color who came from absolutely nothing, the worst circumstances you could imagine as an enslaved person to rise up and really fight for those values that we as Americans claim that we fight for – freedom, equality, justice – she really fought for them."

Larson hopes the new note will inspire people to keep fighting for those values.

"Maybe she’ll be a great reminder to people every time they see her image on a $20 bill that we still have work to do," Larson said.

And Wyatt is proud to see her Aunt Harriet take her place among other American patriots.

"For too long in the past, we've upheld – without even thinking – we've upheld people that had racist views," Wyatt said. "African Americans are a part of this country. They have made this country and built this country with free labor for all those years and we deserve our place right alongside our White counterpart."