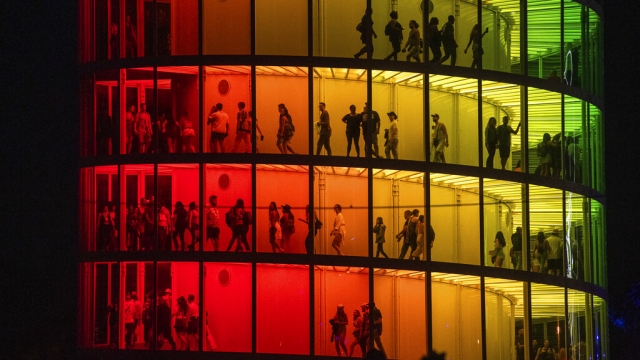 Ecologist Jim Cornett came to the Coachella Valley decades ago.

“I have never looked back since I finished college,” said Cornett.

Studying the plants and animals in this desert oasis.

“That's a whip tail lizard, he’s not one of my friends,” said Cornett.

And when a massive music festival came to town, his consulting firm helped the group that runs Coachella study its environmental impact.

A few years in he stopped doing them, because, he says the impact was so low.

“It's just transplanting activities that people would do so that they do them all together in one place,” said Cornett.

Not everyone sees it that way.

The Washington Post, running a lengthy article last fall, labeling climate change a long-term threat to the very existence of the festival and others like it.

Pointing to a report from the organizer behind Coachella that says its events generate more than 1,600 tons of waste a year.

Not to mention the carbon footprint of festival goers who drive and fly from every corner of the earth.

“There are a lot of drivers from all over California,” said Alex Kravitz.

Alex Kravitz, who runs a store in nearby Palm Springs, also works for Lyft part-time.

He’s seen the crush on Coachella firsthand, the flock of cars swarming the town of Indio.

“When people exit the venue, you wait two hours for one, for one, right? And that ride is like around 10 to 15 dollars. So, it's not worth it to drive,” said Kravitz.

Yet Cornett just doesn’t see festivals like Coachella, as something worth worrying about.

“Coachella is a snowflake on a glacier. We need to look above and beyond what we do on a daily basis and look at the very biggest picture,” said Cornett.

In his mind, recycling and carpooling, as Coachella encourages its attendees to do, help. But they do not meaningfully reduce carbon emissions or reverse climate change.

They aren’t really what’s going to save planet earth, and they won’t help this already vulnerable valley, from dramatically transforming in the years ahead.

“It's already too hot to dry to sustain Joshua trees, for example in Joshua Tree National Park,” said Cornett. “Most of the Joshua trees are around 4,000 feet or so. Those are all going to vanish in the decades ahead.”

Here, at least for Jim Cornett, it’s about living with the inevitable, not stopping a music festival.

“You're going to have to hunker down in the summer, probably spend money on remodeling your home, so it's much better insulated. Coachella is not a culprit in all this,” said Cornett.