The Dream Of A Donald Trump, Derek Jeter Ticket Is Dead 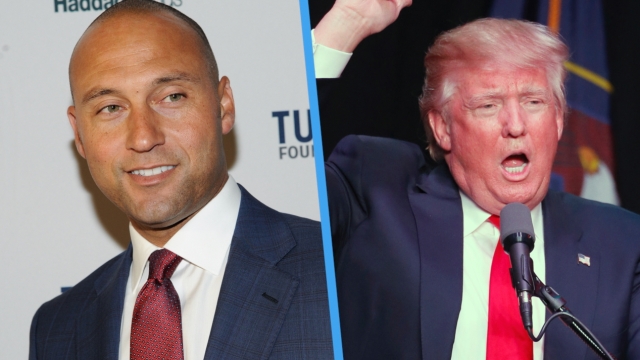 SMS
The Dream Of A Donald Trump, Derek Jeter Ticket Is Dead

For a guy known for his hard work, former New York Yankees shortstop Derek Jeter seems to think being Donald Trump's running mate would require too much effort.

She asked Jeter about being Trump's vice president. The response from "The Captain"?

So there you have it. The dream of a Trump-Jeter ticket is dead. But it leaves us fantasizing about what could've been.

Jeter would've almost definitely had Trump's backing if he wanted the job.

"I like Derek for a lot of reasons — one of them is he happens to live in one of my buildings, and he's a prime, prime guy. Great," Trump said in a video posted in 2011.

And Jeter definitely has the leadership qualities. He was captain of the New York Yankees for 11 years, the longest in team history. He led the Yankees to five World Series championships.

Jeter was also ranked the world's 11th greatest leader by Fortune back in 2014 — ranking just behind Amazon CEO Jeff Bezos.

And Trump could use help from Jeter in New York. In a recent Emerson poll, Democratic front-runner Hillary Clinton beat Trump by 19 percent in the state.

Trump, who has yet to secure the Republican nomination, hasn't said who his running mate will be. But sadly, it looks like we'll have to cross Jeter's name off the list.

This video includes clips from Nike and Gatorade and images from Getty Images.