The DOJ Is Distancing Itself From Rudy Giuliani 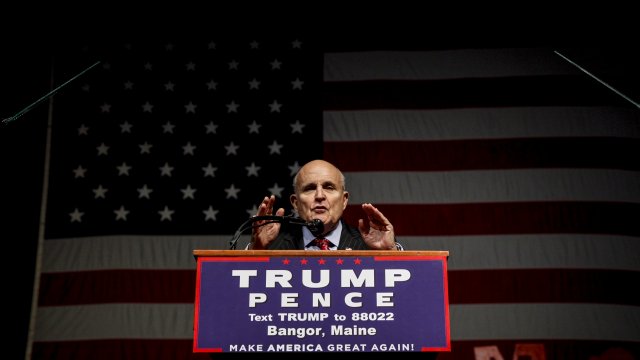 The Department of Justice is distancing itself from the president's personal attorney, Rudy Giuliani.

The New York Times reports a top DOJ Criminal Division official and fraud section lawyers met with Giuliani several weeks ago about an unknown client he was representing.

The DOJ says officials didn't know then that Giuliani associates Lev Parnas and Igor Fruman were under federal investigation in the Southern District of New York. The men were later charged with campaign finance violations and trying to unlawfully influence politicians.

A department spokesman told the Times the officials "were not aware of any investigation of Mr. Giuliani's associates in the Southern District of New York and would not have met with him had they known."

However, an unnamed DOJ official reportedly told the Times that Attorney General William Barr did learn about the investigation soon after he was confirmed in February.

There's no denying the ongoing connection between the Department and the president’s personal attorney in this impeachment inquiry. Not only are Barr and Giuliani mentioned throughout the transcript of President Trump's phone call with the Ukrainian president, they are mentioned together three times. According to the transcript, President Trump told president Volodymyr Zelenskyy several times that the men would work together.

Giuliani has been working in Ukraine, at least partly on the president's behalf, for some time now. He says he was also working on behalf of the State Department.

Multiple outlets report that Giuliani himself is under investigation by the Southern District of New York, but the U.S. Attorney's office there has neither confirmed nor denied that.