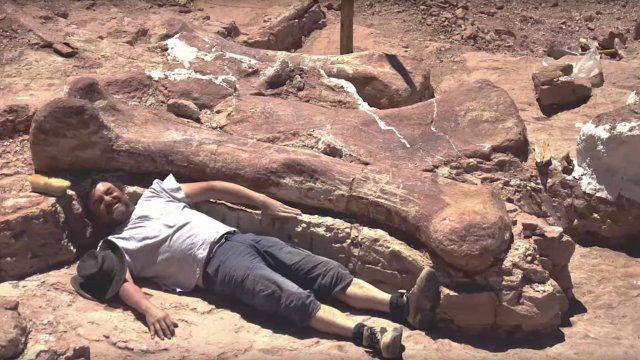 The largest creature to ever walk the Earth has just been named.

Meet the Patagotitan mayorum, a species of titanosaur, described as the biggest land creature to date in a new study released Wednesday.

Related StoryT. Rex Was Probably Much Slower Than You Thought

An exhibit of the massive dinosaur has been on display at the American Museum of Natural History since last year. But until now it was nameless, and we didn't know just how big the thing was.

At 152,000 pounds, it weighs more than 10 African elephants. Its length is over two-thirds the width of a football field.

Paleontologists discovered its bones four years ago in Argentina. It took over a year to excavate it.

Scientists say this new information could help determine the upper limit of just how large a land-based creature is capable of getting — something that's still unknown.