The Battle Over Guns Went Local In 2019 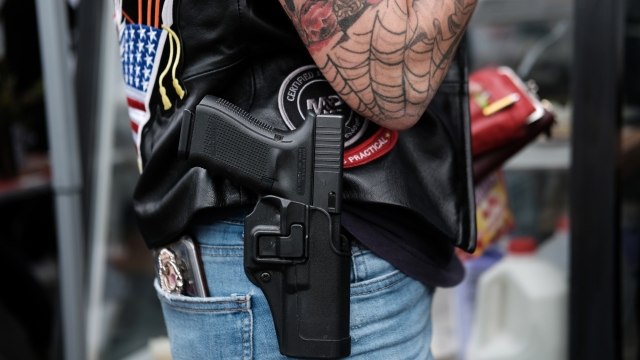 While some bills addressing gun violence stalled in Congress, state legislatures moved forward with passing their own gun laws.

In 2019, the U.S. surpassed the number of mass shootings and overall gun deaths from the previous year. That's according to the Gun Violence Archive.

"H.R. 8 — to require a background check for every firearm sale."

And while some bills to address gun violence stalled in Congress, state legislatures moved forward with passing gun safety laws. According to the Giffords Law Center to Prevent Gun Violence, four states — Nevada, New Mexico, New York and Washington — passed laws related to background checks, one of the most popular measures among registered voters. According to a Quinnipiac poll, 93% of respondents support background checks for all gun buyers.

Allison Anderman, senior counsel at the Giffords Law Center, said: "After the massacre in Parkland, Florida, in February 2018, eight more states enacted these laws, and four states plus the District of Columbia have enacted their own this year. This policy has taken off since devastating killings at Marjory Stoneman Douglas High School last year."

"Supervisors voting to pass the Bedford County version of a Second Amendment sanctuary."

"This is all just about the right to keep and bear arms."

"This will guarantee people's rights to the Constitution."

These are local governments where officials say they won't enforce existing or proposed gun laws they consider to be "unconstitutional."

According to Gun Owners of America, a gun rights group, more than 200 counties, cities and towns in 19 states have passed Second Amendment sanctuary ordinances.

In Virginia, for example, local governments passed those resolutions after Democrats gained a majority in local elections. The state's attorney general says those resolutions will have no "legal effect." In 2020, Democrats in Virginia are expected to make gun legislation a top priority.

Elsewhere, in places like Weld County, Colorado — a Second Amendment sanctuary — those resolutions could have an impact on actual law enforcement.

Weld County Sheriff Steve Reams: "I can't enforce a law that I believe goes against our state constitution and our federal Constitution."

At the national level, Senate Majority Leader Mitch McConnell has said he won't move forward on gun legislation unless President Trump signals he will sign that legislation into law.

But if 2019 is any indication, that won't stop state legislatures and local governments from taking matters into their own hands, since gun violence is one of the most important issues for American voters going into 2020.