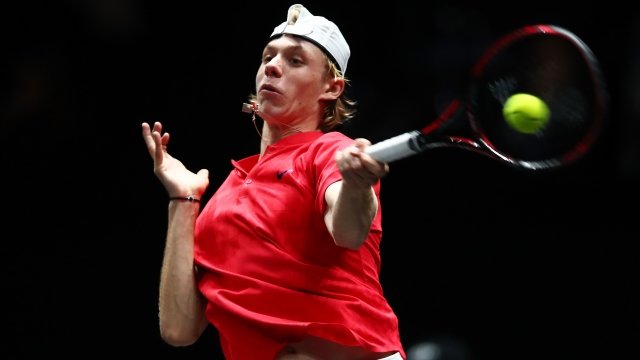 SMS
Are These Rule Changes What It Takes To Get Young People Into Tennis?
By Carter Woodiel
By Carter Woodiel
November 2, 2017
The men's tennis tour is trying out must-win points and shorter sets in a move to attract younger viewers.
SHOW TRANSCRIPT

If you're a young person who doesn't watch tennis, the men's tennis tour is trying to change your mind.

The Association of Tennis Professionals is starting a new end-of-year tournament this year, the Next Gen ATP Finals, which begin Tuesday. It's a showcase for young up-and-comers on tour.

It's also a guinea pig for a bunch of new rule changes the tour is trying out — and the organization is hopeful it'll get more young people to tune in to tennis matches.

First off, the tournament will feature winner-take-all points if a game is tied and goes to deuce. Usually they'd keep playing until one of the players won by two.

Sets are also shorter. Usually players need to win six games to win a set — now they only need four, with a tiebreak coming if they're tied at three.

On top of that, serves that hit the net and go in will now count instead of being a do-over. And fans at the arena will be allowed to move around while play is going on, breaking a longtime tennis taboo.

Those rules are in place because the ATP is trying to make matches more TV-friendly. The thinking is shorter sets and must-win points will make each individual point more important, ramping up drama.

There are even rules outside of the points themselves aimed at making a better TV product. Pregame warmups are shortened, for example. Players can also communicate with their coaches in the stands (usually a no-no) because it's cool to watch on TV.

There's reason for the ATP to be worried about attracting young fans — at least here in the U.S. A study from the Sports Business Journal found the typical American men's tennis viewer was a decade older in 2016 than in 2000.

It's hard to tell whether these rules will alleviate that issue, but ATP brass isn't ruling out incorporating some of them into traditional tour events in the future. Though it assures fans the sport's biggest traditions will be kept intact.