Thailand Cave Rescue: Crews Debate How To Get Boys Out Amid Rains 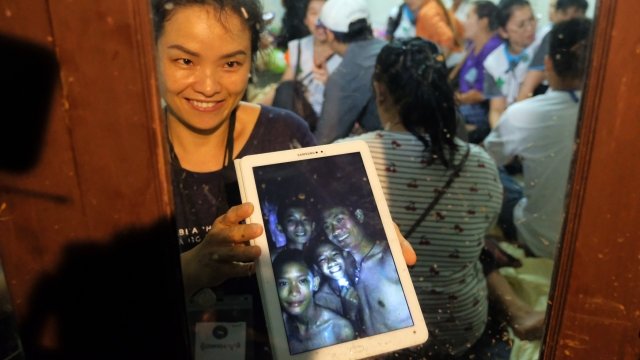 Many breathed sighs of relief when a missing Thai soccer team and their coach were found alive in a cave Monday.

But now the question is, how will the rescue teams get them out?

There are several challenges in the rescue efforts. First, the channel needed to access the team is flooded, and so far efforts to drain it have been unsuccessful, according to CNN.

That doesn't mean all hope is lost, however. Crews can continue to pump water from the cave or wait for water levels to fall naturally over time.

But that could be months, and monsoon season doesn't end until October.

The least desirable option and probably the most dangerous is having the boys and their coach scuba dive out of the cave. Experts say the cave has no natural light, and the Thai Navy Seals have experienced problems moving through the high muddy waters and tight channels.

And all of the problems will be exacerbated if the boys can't swim, which at least some of them reportedly cannot.

The boys have received medical treatment and will have four months' worth of food while they wait to be rescued. More rain is expected in the coming days.