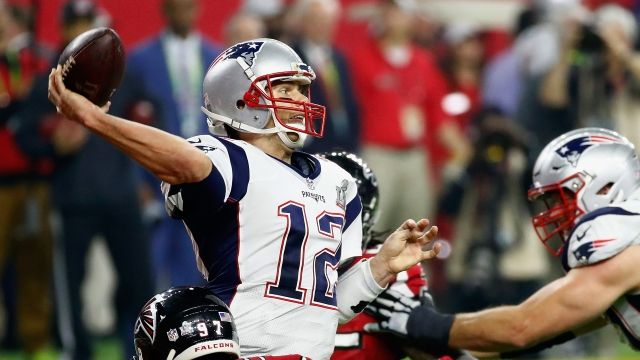 Multiple law enforcement agencies are now on the case.

He asked the Texas Rangers to work with the Houston Police Department to investigate the New England Patriots quarterback's missing jersey.

"I'm a Texans and Cowboys fan first, but the unquestionable success of the Super Bowl in Houston last night was a big win for our entire state, and I don't want anything to mar that victory," Patrick said in a statement.

We're not talking about the Texas Rangers baseball team. Though the team did tweet it'd put star infielder Adrián Beltré on the case.

We're talking about the Texas Rangers law enforcement team, which dates back to 1835.

Brady wore the jersey during the Patriots' historic overtime win against the Atlanta Falcons. Sometime between the end of the game and accepting the Vince Lombardi Trophy, Brady changed into a T-shirt.

An auctioneer told the New York Post that Brady's jersey, which was last seen in the Patriots' locker room, could be worth as much as half a million dollars.

The Patriots Pulled Off The Best Super Bowl Comeback Ever

The biggest title-game comeback ever was 10 points. The Patriots were down 25.

But if it's not authenticated soon, it could be worth nothing.

"It's unfortunate because that's a nice piece of memorabilia. So if it shows up on eBay somewhere, someone let me know — try to track that down," Brady said during a press conference after Sunday's game.