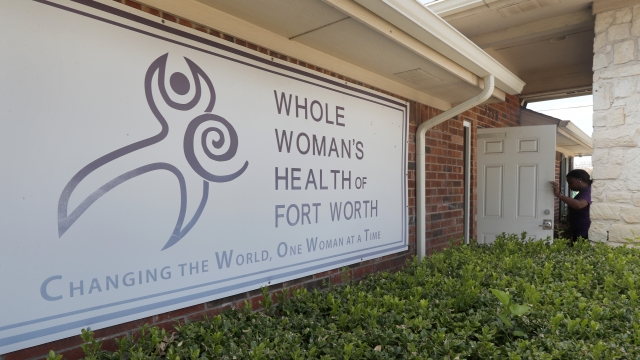 SMS
Some Texans Are Seeking Abortion Services Elsewhere
By Amber Strong
By Amber Strong
September 3, 2021
In Washington, Democrats in the House are pushing for a bill to make Roe v. Wade a federal law.
SHOW TRANSCRIPT

In Kansas, Oklahoma, New Mexico, Colorado and even as far away as Illinois, clinics around the country are reporting an increase in Texans seeking an abortion.

"Our phones have been a lot busier this week, mainly from Texas patients and also from patients that normally would be seen in Texas," said Ashley Brink, clinic director at Wichita Trust Women.

"We've had to cap our schedule, we're scheduling out three weeks, until September 21, is the earliest available appointments," said Kailey Voellinger, the Oklaholma City clinic director at Trust Women. "We had a patient call today who was a Texas patient, she had done her ultrasound visit, right in Texas, they have the mandatory ultrasound, 24 hours in advance. She was under six weeks, when they got her back for her procedure, they could hear heart tone, and they had to turn her away right before her surgery."

Researchers at the Guttmacher Institute have predicted some of the impact on women.

In Texas, instead of driving an average of 12 miles one-way to an abortion clinic, they now need to drive closer to 250 miles. That's 20 times more.

"Even if you have the money to afford abortion, could you have the time to take off of work? Do you have the people to watch your children? Can you stay overnight? You know?" Voellinger questioned. "Or can you do a 20-hour day driving to the clinic, for seven hours being in the clinic, for eight hours and driving home?"

Back in Texas, providers say the punitive damages that would come from violating the new law aren't worth the risk.

"The state has placed a bounty, a $10,000 bounty, on our head," said Marva Sadler, senior director of clinical services at Whole Woman's Health. "They've now allowed the everyday citizen to bring lawsuits against us if they feel we've aided and abetted a woman having an abortion past the time of fetal heart tone."

Anti-abortion groups say these providers represent a minority and the law reflects the will of many Texans who see abortion as a matter of life and death.

In Washington, Democrats in the House are pushing for a bill to make Roe v. Wade a federal law. But without a majority in the Senate plus 10 votes from Republicans, that push is mostly symbolic.