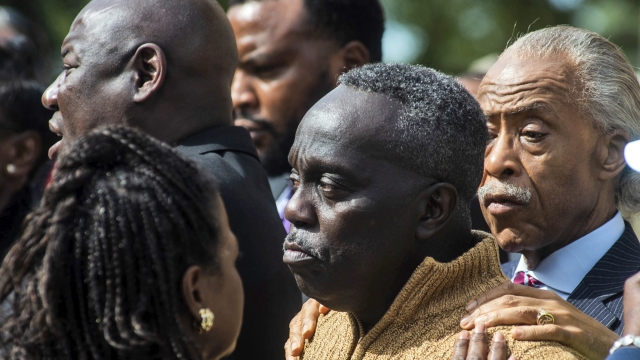 A judge denied mistrial requests on Monday at the trial of three white men charged with murdering Ahmaud Arbery after defense attorneys claimed jurors were tainted by weeping from the gallery where the slain Black man's parents sat with the Rev. Jesse Jackson.

The morning's testimony was largely disrupted by arguments outside the jury's presence over Jackson's appearance. The judge said he found one defense lawyer's complaints last week about Black pastors to be "reprehensible," and that no group would be excluded from his courtroom.

Father and son Greg and Travis McMichael armed themselves and pursued the 25-year-old Black man in a pickup truck after spotting him running in their neighborhood on Feb. 23, 2020. Their neighbor William "Roddie" Bryan joined the chase and took cellphone video of Travis McMichael shooting Arbery three times with a shotgun.

Tensions flared in the courtroom Monday morning soon after Jackson sat in the back row of the courtroom between Arbery's parents. Defense attorney Kevin Gough asked the judge to make the civil rights leader leave to avoid unfairly influencing the jury.

"There is no reason for these prominent icons in the civil rights movement to be here," Gough said Monday. "With all due respect, I would suggest, whether intended or not, that inevitably a juror is going to be influenced by their presence in the courtroom."

Superior Court Judge Timothy Walmsley declined the request. Courtrooms are generally open to the public, although the judge has limited seating in the public gallery because of the coronavirus pandemic.

"The court is not going to single out any particular individual or group of individuals as not being allowed into his courtroom as a member of the public," Walmsley said. "If there is a disruption, you're welcome to call that to my attention."

Jackson told reporters outside the courthouse he came to coastal Brunswick to support justice for Arbery's family, not in response to the attorney's prior remarks about Black pastors.

"As the judge said, it was my constitutional right to be there," Jackson said. "It's my moral obligation to be there."

Jackson acknowledged that it was Arbery's mother who wept "very quietly" in the courtroom after prosecutors showed a photo of her son to a witness.

Gough's mistrial request was joined by the two other defense teams. Franklin Hogue, an attorney for Greg McMichael, said he fears the defendants aren't receiving a fair trial in the community.

Jason Sheffiled, one of Travis McMichaels' attorneys, said the weeping caused some jurors to look and see Jackson, an icon "whose autographed picture hung in my mother's loft for decades."

"Several jurors did look over. Their faces changed (showing) the emotion and sympathy they felt," Sheffield told the judge.

Walmsley warned the attorneys their own statements may have lured some high-profile figures to the courthouse.

"I will say that is directly in response, Mr. Gough, to statements you made, which I find reprehensible," the judge said.

Walmsley singled out a comment Gough made to back up his "Black pastors" remark last week in which he said: "If a bunch of folks came in here dressed like Colonel Sanders with white masks sitting in the back" before the judge cut him off.

Outside the courthouse last week, Sharpton denounced the disproportionately white makeup of the jury. Walmsley allowed the jury to be sworn in over objections by prosecutors who said several potential jurors were excluded because they are Black, leaving only one Black juror on the panel of 12. Glynn County, where the trial is being held, is nearly 27% Black.

Sharpton said he'll return to the courthouse, and activists said 100 Black pastors will join him.

Bryan and the McMichaels are charged with murder and other crimes. Prosecutors say they chased Arbery for five minutes to keep him from exiting the Satilla Shores subdivision outside the port city of Brunswick. The chase ended when Arbery, trailed by Bryan's truck, tried to run around the McMichaels' truck as it idled in the road ahead. The video shows Travis McMichael confronting Arbery and then shooting him as he throws punches and grapples for the gun.

The McMichaels told police they suspected Arbery was a burglar after security cameras recorded him several times inside a home under under construction, five houses away. The defense says Travis McMichael opened fire in self-defense.