The Grand History Of Broken Promises From Presidential Candidates 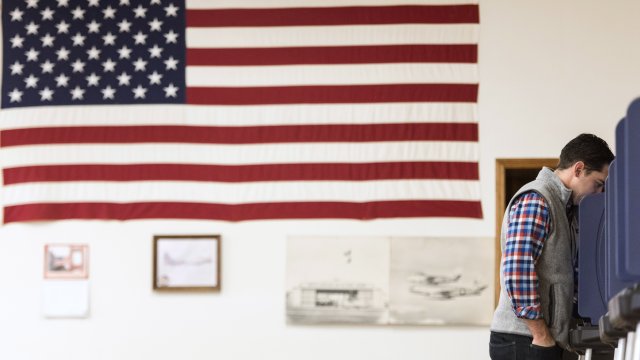 All politicians make promises. That's what campaigns are all about. But those vows are often broken. That doesn't necessarily mean they lied. Sometimes things change — what sounds right on the stump doesn't make sense later. Big promises — including broken ones — are not new. In 1916, two years after Europe became engulfed in a bloodletting like the world had never seen, Woodrow Wilson ran for re-election.

His campaign slogan: "He kept us out of war." The implicit promise: He would do it again. What actually happened is this: 34 days into his second term, Wilson signed the declaration of war against Germany. More than 4,355,000 Americans were mobilized; 116,516 died.

George H.W. Bush made a catchy pledge at the 1988 Republican National Convention only six words long: "Read my lips: no new taxes." It didn't last. Spending levels and budget shortfalls, pushed President Bush to compromise with Democrats and raise "luxury taxes" on things like yachts and expensive cars.

H.W.'s simple line is credited with helping him defeat Michael Dukakis in 1988 — and then helping him lose to Bill Clinton in 1992.

Presidential politics has attracted some, well, unusual, if not wacky, promises, too. It wasn't always clear if the candidate was serious. But here are three worth noting: Gabriel Green, founder of the Amalgamated Flying Saucer Clubs of America, ran for president in 1960 promising to usher in "The World of Tomorrow, and UTOPIA now." Retired farmer Connie Watts also campaigned in 1960. He promised to "keep them 'vine-ripened' stickers off of them mushy green tomatoes."

Commentator Alan Caruba ran in 1988 and promised to name Vanna White of "Wheel of Fortune" to a high position because "she's the only person I know who negotiated a million-dollar contract just for turning letters."

Today, as presidential cycles have become never-ending affairs, you're guaranteed to hear some version of:

"If elected president, I promise I'll..."

Some you'll believe. Some you won't. That’s a promise.