Telemedicine Can Save Lives In Rural Areas, But It's Still Hard To Get 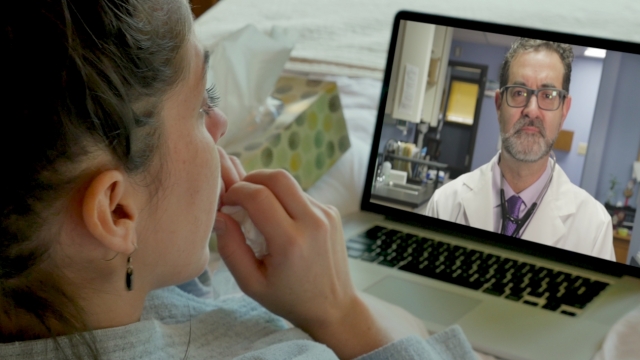 Sundance, Wyoming, is small — less than 1,300 people live here. Francis Mackey says she loves its size. But for the majority of her health care, Mackey drives into South Dakota. She says she was lucky to be at a regional hospital for an appointment for her daughter in September 2018 when she suffered a stroke.

"I had just checked in at registration and was sitting down in the waiting room when I had my stroke," Mackey told Newsy. "I had no idea I was having a stroke. I knew something was off when I was checking in because I was just trying to think of words and trying to answer the lady. I was struggling a little bit and then when I sat down, I just — I don't remember anything, except bits and pieces here and there."

The hospital didn't have a neurologist specializing in stroke in-house. But doctors used remote software, tools, and an internet connection to quickly diagnose the stroke, and then airlifted Mackey to Denver, Colorado.

They worked with Dr. Jeffrey Wagner and the neurology team at Swedish Medical Center. The hospital offers telestroke and more than a dozen other specialities — via telemedicine. Through a mobile robotic screen, specialists video conference with patients. For strokes alone, Wagner consults an average of 30 patients a day across four states.

"I can be on a shift and I can do a consult in 60 different hospitals within the same day, potentially in different regions, whereas maybe I could get to three hospitals if I was driving around. It's just a hugely beneficial service for that," Wagner said.

The tools have taken off: 76% of hospitals in the U.S. report using telehealth in 2017. But the benefits aren't reaching everywhere. Especially in rural areas, patients are facing barriers — one of the biggest being a lack of broadband internet access.

"That's a key element to this whole scenario," Paul Murphy, Assistant Vice President of Virtual Network (Telemedicine) for HealthOne told Newsy. "One reason why a telemedicine program has failed is they get the equipment. They try to go live, and the next thing you know, the glorified Facetime looks like a cheap foreign movie. When you have that kind of disconnect, it's a really dissatisfied for the patient, for the provider, and for the hospital."

The FCC thinks it could help solve some of those connectivity issues. Last year, the commission approved 100 million dollars in funding for telehealth.

The FCC recently approved moving forward, asking the public for input on how to spend the money. FCC Commissioner Brendan Carr told Newsy those funds could go toward discounts of up to 85% for new broadband connections. He says it could pay for programs inside hospitals or for patient monitoring apps on smartphones, for example. But it would still be months before that money is dished out.

Other barriers remain, too. Experts say Medicaid reimbursement is complicated, because the programs that cover some of the costs vary from state to state. And providers say licensing is a long, convoluted process because physicians have to be licensed in each state they treat patients.

"it takes us about a year with aggressive credentialing. I mean multiple people calling and pursuing this to have somebody ready to take their first shift in this network," Dr. Wagner told Newsy.

In the meantime, the FCC's latest maps show certain broadband-related problems are getting worse. As of 2017, there are a million more people living in “double burden” counties — ones with high levels of chronic disease as well as a need for greater broadband connectivity. And most of the counties with the worst access to primary care physicians are also the least connected.

But for patients like Mackey, telemedicine, if it’s available, could make a compelling difference.

"I don't know where I would be without it. They were extremely fast to figuring out what was going on. And they had me on a plane as soon as they could. If I would have had my stroke here in Sundance, I don't know what the outcome would have been," she said.